Six Of The Best Times Drake Rapped About Los Angeles 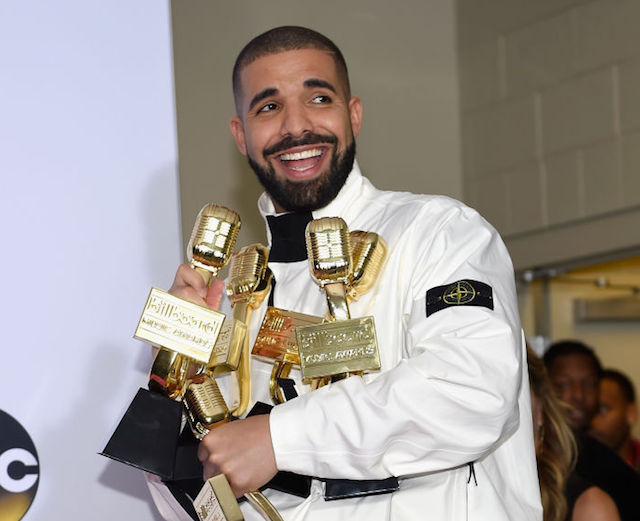 Drake trying not to drop all his Billboard Awards. (Photo by David Becker/Getty Images)

Like him or not, Drake holds an incomparable level of fame in contemporary America. His meteoric rise from scrawny Degrassi star to Hot Man With Money And Rap Beefs (Buzzfeed did the important work of recognizing that 2015 was the year Drake officially got hot) has allowed him to balance corniness and aggression in his raps—he has feelings, and he'll never let you forget it.

He'll also never let you forget that he's from Toronto—he taught us what "the 6" is shorthand for. Despite the intense hometown pride, however, Drake owns two homes near L.A. This means that Aubrey Drake Graham doesn't only rap about Toronto; L.A. has made several appearances in his lyrics as well. Sometimes they make sense and paint a portrait of his started from the bottom persona. Other times, well, just see for yourself.

This one is less a direct reference to Los Angeles and more a use of Southern California to throw shade. After asking his girl, "Why you gotta fight with me at Cheesecake?" Drake continues by describing the restaurant as "a place for families that drive Camrys and go to Disney," claiming "they don't need to know all of our business." Here, Disney could technically be either Disneyworld or Disneyland, but for the purposes of this article, he is rapping about Disneyland. He is rapping about the vehicular dream of Southern California as the platonic nuclear family ideal, creating the holy trinity of American consumption: the Cheesecake Factory, Disney, and a sensible Japanese sedan.

But see, here, Drake also mentions his affection for Cheesecake Factory, when he reminds his girl how "You know I love to go there." If Cheesecake is a place for families who go to Disney, and Drake loves Cheesecake, then Drake himself is a family who loves to go to Disney. Get comfortable in L.A., Drake, this world is your home.

In 10 Bands, Drake reminds listeners of his clout as a rapper who needs to hide away from the media. He teases us, saying "I can tell ya 'bout them safe house nights out in Calabasas." His safe house in Calabasas must be the location of unheard of bacchanalia— or, perhaps, unheard of hours spent crying and gazing wistfully out the window once he saw Rihanna in her Kendrick Lamar's music video for Loyalty. Regardless, Calabasas transforms into a metonym for being incredibly successful. Your roots may lie in Toronto, Drake, but your branches grow in Los Angeles. He also loves Calabasas so much he wrote an entire song called 4 p.m. in Calabasas.

In Free Smoke Drake paints us a portrait of his life at his YOLO estate. In the beginning of the second verse, he raps "Dom Rosé toast / Hidden Hills where I post," before going on to mention how he drunk texted an old number of J. Lo's. Here, he really epitomizes his L.A. self—we're the city where it's possible to have year-round rosé and pink skies at every sunset. The Hidden Hills is a gated community near Calabasas where celebrities often live to remain hidden from the public eye. In this song, Drake offers a similar set of L.A. circumstances as in 10 Bands; L.A. represents how huge he's become, but he also has to live far away from the center of its power.

While technically Nobu is an international chain, and will soon set up shop in Toronto, Drake has taken both Rihanna and J. Lo to the L.A. location, so it clearly holds a special place in Drake's heart. In fact, he uses Nobu as a clear demarcation of success. In Gyalchester he raps, "Can't get Nobu, but you can get Milestone." Milestone is a Canadian restaurant chain, so Drake draws a stark line between the pre-success (Milestone) and post-break-out (Nobu) self.

(You may be wondering, why does this list use Gyalchester's reference to Nobu when, in the Drake/Future collaboration "Jumpman," the name Nobu is repeated six times in a row? In "Jumpman," Nobu comes out of Future's mouth, not Drake's, so it is therefore disqualified from this list.)

In perhaps the most absurd reference to Los Angeles in all of Drake's songs, he shouts out the "Beverly Center Macy's where I discovered Bria." Bria is a reference to Bria Myles, an old flame of Drake's for whom he wrote Bria's Interlude. He described the inspiration for the latter track to MTV in 2010, saying "I was smitten over this girl from L.A. and I started writing a song about her." He also apparently was smitten with the location. This was far before construction started on the mall, which means he met Bria at the old Beverly Center. A former LAist writer described the former Beverly Center as "unattractive and dated," but at least that "unattractive and dated" space is immortalized in a Drake verse.