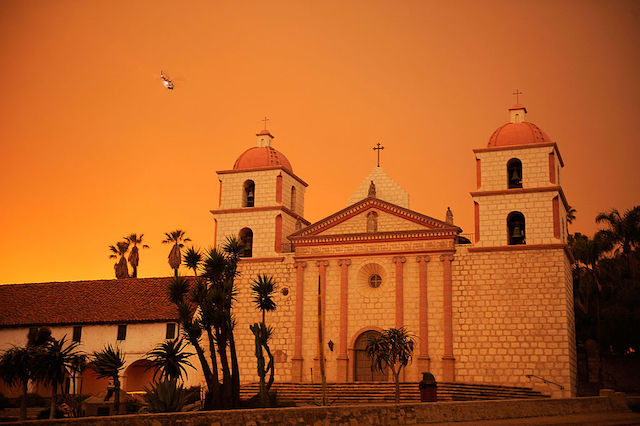 A statue of St. Junipero Serra in front of the Old Mission Santa Barbara was vandalized Monday, prompting workers to fully remove the statue. The head was missing and the statue was covered in red paint. An investigation has been put in place by the Santa Barbara Police Department.

The mission, which houses 20 friars as well as the Franciscan School of Theology, is one of several locations of recent vandalism along the Central Coast. A statue of Serra was vandalized in Mission Hills in August, according to the Ventura County Star. A separate statue in Monterey was decapitated in October 2015.

No, not a Confederate. pic.twitter.com/XSNEjo030J

The increase in vandalism against Serra comes following his canonization by Pope Francis in 2015. The friar was active in California in the 18th century, building nine missions and baptizing thousands of Native Americans, according to the L.A. Times. Some Native American communities in the Central Coast regard his legacy as one of oppression; some say he'd rendered many Native American tribes virtually extinct upon absorption into Serra's missions. Pope Francis had a different view of Serra; in deciding to confer sainthood upon him, he said Serra "sought to defend the dignity of the native community, to protect it from those who had mistreated and abused it," according to CNN.

The criticism of Serra casts a wide net and the Catholic Church is not ignorant of the position against him; alongside the Pope's announcement of his sainthood, the Church released a website dedicated to rebranding Serra's life story. Serra's missions were known for "flogg[ing] the insolent and chas[ing] those who tried to escape," according to the L.A. Times, but priests spearheading the rebranding efforts also had "191 handwritten letters testifying to the holy work in the California missions."

It appears the anti-Serra vandals disagree with this effort to paint him in a positive light. The statue in Mission Hills that was vandalized in August had the word "murderer" emblazoned across the monument.