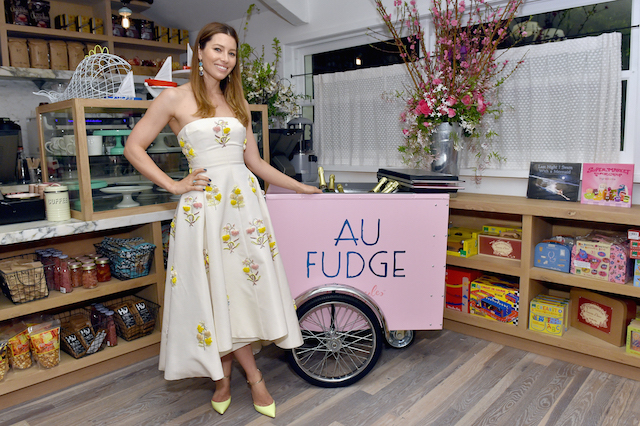 Every city gets the restaurant it deserves, and last year West Hollywood was gifted with Jessica Biel's Au Fudge: a "Soho House for kids" serving Cal-French cuisine.

Unfortunately, trouble appears to be brewing amidst the organic, rainbow-colored food at Au Fudge. On Wednesday, nine mostly former employees filed a lawsuit in L.A. Superior Court against the restaurant, Biel, and her business partners, for allegedly denying the plaintiffs meal and rest breaks, and withholding "tens of thousands of dollars in gratuities from major Hollywood parties they worked for companies like Netflix, Amazon and Fox," according to the Hollywood Reporter.

“Each of them had their gratuities wrongfully converted and were improperly denied meal and rest breaks, overtime compensation and earned wages under various illegal payroll practices,” the nine plaintiffs allege, E! reports.

According to the Hollywood Reporter, the "wrongfully converted" gratuities from the restaurant's private party buyouts are at the heart of the lawsuit:


The tips, though, are really the entree in this suit. The restaurant relied heavily on private events and buy-outs business, according to Alexandra Desage, not a plaintiff but presumably related to the other two Desages who are. She provided a declaration in which she alleges that staffers were meant to be paid a generous 22% gratuity for private events. However, the plaintiffs claim that they missed out on tips for many of these major industry parties put on by Netflix, Fox, Amazon, Marc Jacobs International and Toms.

"Initially, Au Fudge’s owners blamed the 'glitch' of converting the private event gratuities to a single manager. However, even after this allegedly rogue manager was terminated, Au Fudge’s practice wrongfully converting the gratuities of Plaintiffs continued," the lawsuit alleges. It also describes the staffers as "young adults new to the workforce and new to Los Angeles" who "were unfamiliar with workers' rights and were ill-prepared to deal with violations of their rights in the workplace."

"Many of them saw working as a waiter or other service employee at Au Fudge as a way to get by while trying to begin a career in the entertainment business,'' the suit says.

We reached out to Au Fudge for comment and were directed to contact Au Fudge partner and fellow defendant Jonathan Rollo, who did not immediately respond to a request for comment. We will update this story if we hear back.