Los Angeles might not be known for its historic architecture, but that doesn't mean there aren't gems to be found. The 93-year-old Culver Hotel—hailed as the first "skyscraper" on the Westside—is in a league of its own.

Built by Harry Culver (namesake of both the hotel and surrounding Culver City) in 1924, the wedge-shaped hotel was designed by local firm Curlett and Beelman, which was responsible for a host of other iconic L.A. buildings, including MacArthur Park's Park Plaza Hotel and Koreatown's Talmadge Apartments. Originally known as the Hunt Hotel, the Culver Hotel received National Historic Landmark status in 1997.

The hotel will celebrate Culver City's centennial—and the 10-year anniversary of its own remodeling—with a 1920s masquerade party on September 23, encouraging guests to dress in "masks, feathers, glitz and shimmer." The Culver is more than just a party destination, though; in anticipation of Culver City's centennial, we spoke to Seth Horowitz, general manager of the Culver Hotel, to surface some interesting tidbits from the hotel's storied history. 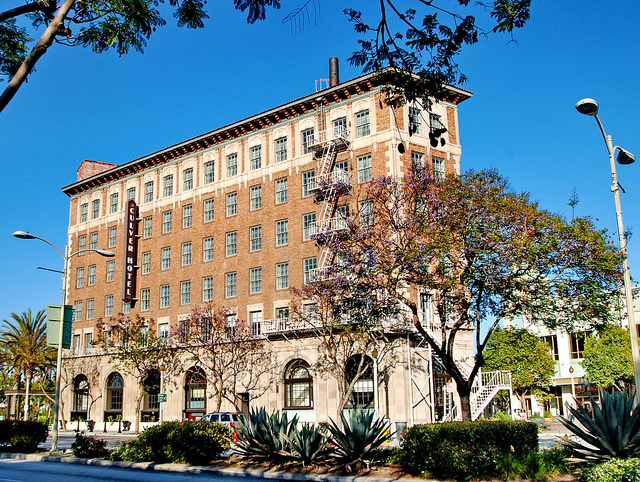 The Culver Hotel in recent days. (Photo by Michael Locke via the LAist Featured Photos pool on Flickr)

The Lollipop Guild. Ever since The Wizard of Oz was filmed at Culver City's MGM Studios in 1939, rumors have swirled about the actors who portrayed the film's "Munchkins" reportedly staying in the Culver Hotel. Legend has it, the Munchkins threw wild parties at the hotel and used its underground tunnel to get to the studio. Seth Horowitz, general manager of the Culver Hotel, confirmed to LAist that all 124 Munchkins stayed at the Culver for the duration of filming; although he couldn't speak to their alleged debauchery, he did note that the Munchkins slept three to a bed.

"The rumors started years ago, that they just trashed the hotel and were swinging from the chandeliers. There were some parties, but nothing like Hollywood legend. I interviewed more than 30 of them, and they said that there wasn't time for partying when they were making 'The Wizard of Oz,'" Munchkin specialist Stephen Cox, author of "The Munchkins of Oz," told the L.A. Times in 1997.

Seven of the surviving Munchkin actors returned to Culver City nearly six decades later, in 1997, for a three-day reunion that was also held at the Culver Hotel.

"The Heart of Screenland." Given its proximity to major filmmaking hubs like MGM Studios, Culver Studios and Hal Roach Studios, the Culver Hotel quickly became a destination for Hollywood glamour. "Every movie that people associate with Old Hollywood, it wasn't actually filmed in Hollywood; it was filmed right here in Culver City," Horowitz told LAist.

John Wayne's lucky night. The Duke himself came into ownership of the Culver Hotel in 1945, albeit in a slightly unorthodox way; he reportedly won it in a card game. Hollywood lore tells us that Wayne won the hotel from none other than Charlie Chaplin, but Seth Horowitz says the rumor of Chaplin's ownership isn't verifiable: "Still, it's a good story."

We Like Ike. During the 1952 Presidential campaign, Dwight D. Eisenhower's L.A. campaign office was located at none other than the Culver Hotel. Eisenhower and his running mate, a little-known political upstart by the name of Richard Nixon, were frequently spotted together in Culver City in the run-up to the election.

Haunted history. Harry C. Culver kept an office on the second floor of the Culver Hotel after founding the place in 1924. Ever since his 1946 death, Culver's ghost has reportedly been spotted in the hallways of the hotel from time to time. Okay, this piece of Culver Hotel trivia isn't exactly "factual", but we all know from horror movies that to question the existence of a ghost is to invite its haunting.