New York may be the Jewish deli capital of the world, but Los Angeles is no slouch when it comes to putting together a nice spread. As a New York-raised Jew who rarely saw the inside of a temple growing up (something I deeply regret, now that I'm watching half my friends live off their bat mitzvah money), I have no particular attachment to my faith, but moving to L.A. made me long for the Jewish cuisine I'd taken for granted in Brooklyn. Luckily, I soon discovered that Los Angeles is home to a thriving Jewish food scene, particularly when it comes to old-school delicatessen.

With Rosh Hashanah and Yom Kippur coming up, there's no better time to familiarize yourself with the best of Los Angeles' Jewish deli options; just think how proud your bubbe will be when you can correctly distinguish between halva and rugelach. Even if you're not a member of the tribe, you may someday find yourself needing to impress your Jewish significant other's family over brunch, a situation in which knowing how to properly dress a bagel can only work to your advantage. Word to the wise: leave no nook or cranny un-schmeared, and don't skimp on the capers. 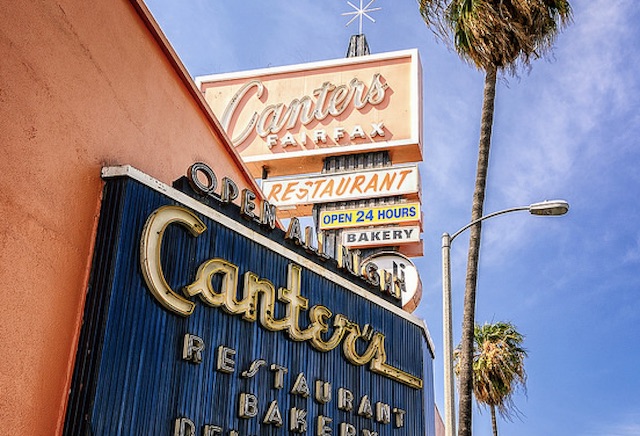 An oldie but a goodie, Canter's has been a beacon of fine delicatessen since it first opened in 1931. Painted a distinctive shade of Creamsicle orange, Canter's is open 24 hours, a true gift when you find yourself wandering the desolate streets of the Fairfax district at 3:47 a.m. and longing for a steaming-hot cup of matzoh ball soup. (If you've never found yourself in this predicament, you haven't lived in L.A. long enough.) There's a certain gloomy glamour to Canter's Deli; the Pfefferman family on Transparent, the "most Jewish show on television", has a standing order there. And in her 2009 essay "Ten Notes on Oscar Season," author Zadie Smith describes repairing to Canter's—a "sprawling Jewish diner where you can get good chicken soup at two in the morning"—with a handful of celebrities after the Vanity Fair Oscar party. Canter's is also home to The Kibitz Room, a wonderfully grubby dive bar that's seen appearances from Guns N' Roses, Joni Mitchell and other legendary musicians. 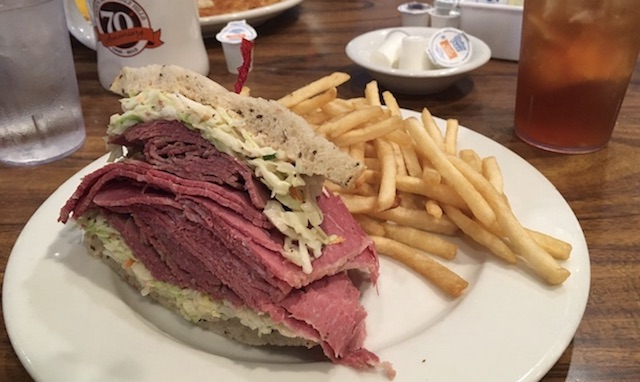 Pastrami and fries at Nate 'n Al. (Photo by Celestine A. via Yelp.)

New York, you can keep your Katz's and your Barney Greengrass; for us Angelenos, nothing hits the spot quite like a languorous Sunday-afternoon feast of matzo brei and cinnamon French toast at Nate 'n Al. After you've finished digesting your brunch and perusing the "Arts & Leisure" section, order half a grapefruit to go and take a slow drive over to the Beverly Hills Athletic Club for an invigorating game of tennis. Then, ease yourself into a schvitz while complaining loudly about your lower back pain. Congratulations, you've just reached peak Affluent L.A. Jewish Grandfather. 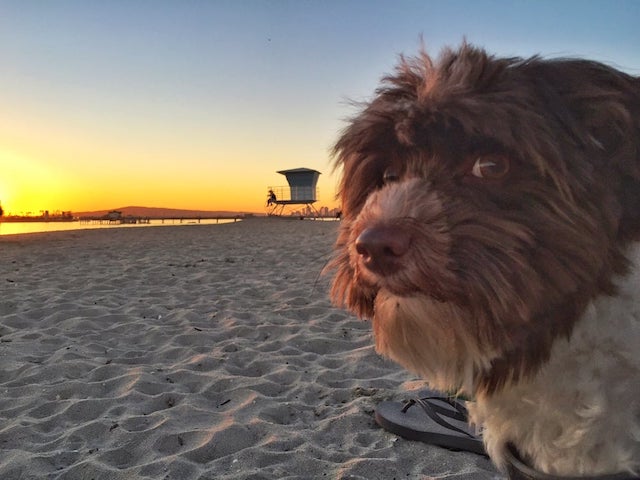 We've written before about Langer's legendary pastrami sandwich, which no less a food authority than Nora Ephron famously deemed the best in the world. The 70-year-old Westlake deli is no one-hit wonder, though; Norm Langer, who inherited the business from his father Al, can often be spotted at the restaurant, doling out corned beef and cheese blintzes with a side of Borscht Belt humor. Sadly, Langer's closes at 4 p.m. daily—if you're in a rush, avail yourself of their "curb service" and get an order to go, but be warned that the famous #19 Hot Pastrami Sandwich is best enjoyed at one of Langer's signature brown booths. 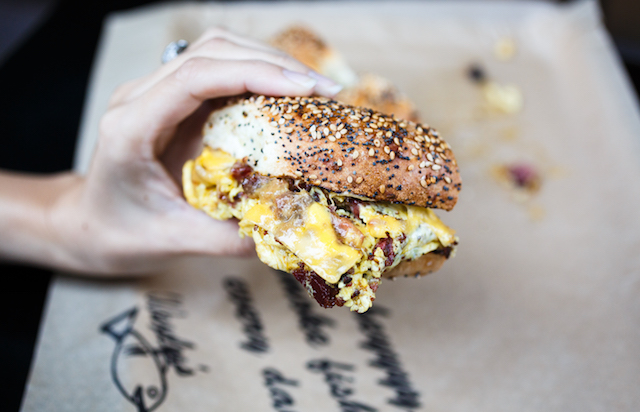 "The Big Poppa" at Wexler's. (Photo by Vanessa Stump, courtesy of Wexler's)

While some Jewish delis refuse to stray from tradition (insert Fiddler On The Roof reference here), Wexler's isn't afraid to try new things. The downtown L.A. deli opened just three years ago in Grand Central Market, but its hearty, applewood-smoked fish and meats landed it on our most recent list of L.A.'s best breakfast spots. When it comes to a Jewish deli, so much depends on a pickle; while some establishments that shall remain nameless are content to serve up sad, soggy specimens alongside your entree, chef Micah Wexler brings the crunch with barrel-fermented pickles made in a salt brine. If you're dining at Wexler's Santa Monica location en route to the beach, pick up a "Big Poppa" (pastrami, egg and cheddar cheese on a bagel) to go, and don't sleep on the chocolate babka. 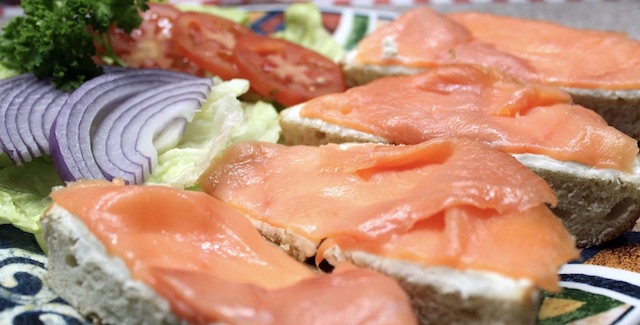 In a city teeming with high-concept "eateries", there's something wonderfully simple about New York Famous Deli. Nestled between a cheese shop and a hair salon on Colorado Boulevard in Eagle Rock, the restaurant offers an impressive Northeast L.A. counterpart to Langer's famous pastrami sandwich, plus some New York-inspired offerings all its own. The eggplant parm really holds its own, and you haven't lived until you've tried the "Rachel's Belly Fries", which come piled with cheese, grilled peppers, onions and roast beef. (Not exactly what they ate in the old country, but hey, it's okay to get a little Reform at lunchtime.) In New York terms, NYFD is less of a Katz's Deli and more of a random-place-next-to-your-subway-stop": you drop in unexpectedly, and you don't regret ending up there. Plus, you don't really want to wait in that never-ending weekend line for Belle's Bagels, do you? 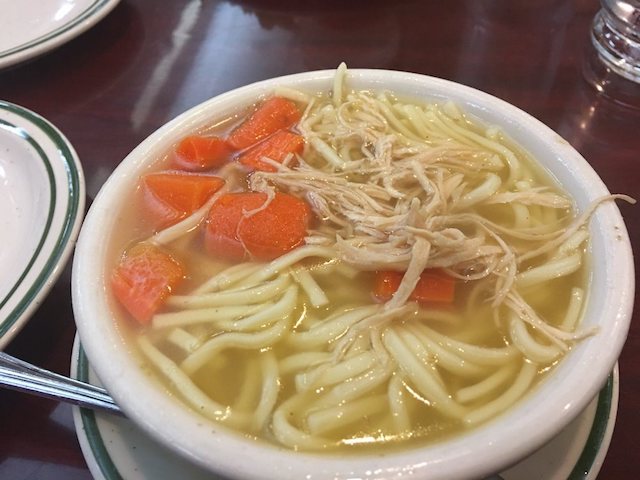 Chicken noodle soup at Brent's. (Photo by Alan B. via Yelp)

Next time you've got a hankering for Jewish deli in the San Fernando Valley, drive directly to Brent's. Even if it were located in the Fairfax district, this Northridge spot would hold its own in the matzo-ball department, and the kreplach—meat or potato dumplings in soup—is the perfect comfort food. (We would have included a picture of Brent's kreplach up top, but it is a cruel fact of life that all kreplach looks disgusting in photos. We don't know why, that's just the way it is.) The portions at Brent's are staggeringly massive, so come with an appetite or be prepared to leave with a doggy bag. To that end, Brent's is a great place to take your Jewish grandma to lunch if you want to give her a built-in subject to complain about: "Why do the portions need to be so big? Back in my day..." et cetera, et cetera. 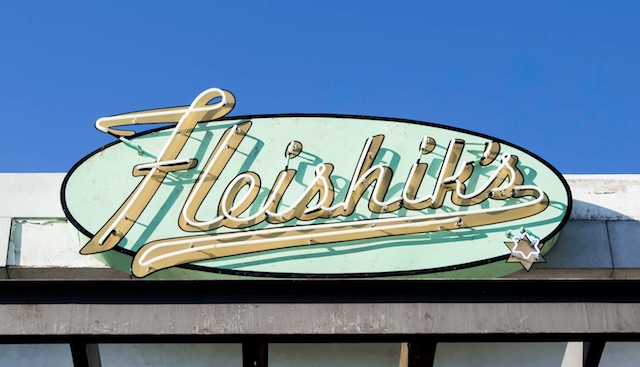 While many of the delis on this list are as old as Moses, Fleishik's just opened in March. Still, the deli is already attracting a cult following to its location near the Grove. Fleishik's is in the mold of New York's updated Russ & Daughters Cafe, offering cheeky modern interpretations of old-school deli favorites. Sandwich-wise, you can't go wrong with the "Bubbe" (brisket, raw red onion and horseradish on a challah roll) or the "Zayde" (grilled salami, pickles and caramelized onion.) In an extremely L.A. update on a New York deli classic, Fleishik's offers an "almond milk egg cream", as well as a host of liquors with which to wash down your nosh. The menu might be playful, but Fleishik's does not play when it comes to Jewish dietary law—the restaurant keeps kosher, with an on-site rabbi supervising the food's preparation, and observes shabbat on Saturdays. 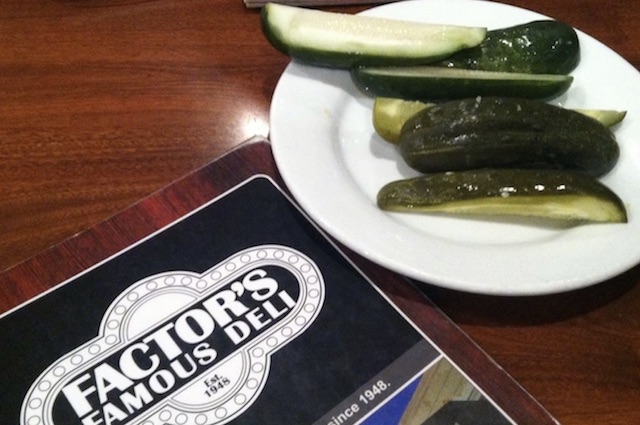 Complimentary pickles at Factor's. (Photo by Winnie L. via Yelp)

There are restaurants that perform wild gastronomical feats to get your attention, and then there are restaurants like Factor's. Occupying the same space on Pico Boulevard since 1948, Factor's shines brightest when it comes to the simple things—smoked fish, matzo brei, corned beef. While Canter's may attract more star power, Factor's does a brisk, no-frills business just fifteen minutes away, serving up food that can best be described as "delightfully predictable." Just to clarify, there's zero shade in that description; the best Jewish delis are marked by their predictability, serving up the same menu standbys—smoked salmon, whitefish, matzo ball soup—in a way that makes you feel at home, no matter what corner of the world you're noshing in.