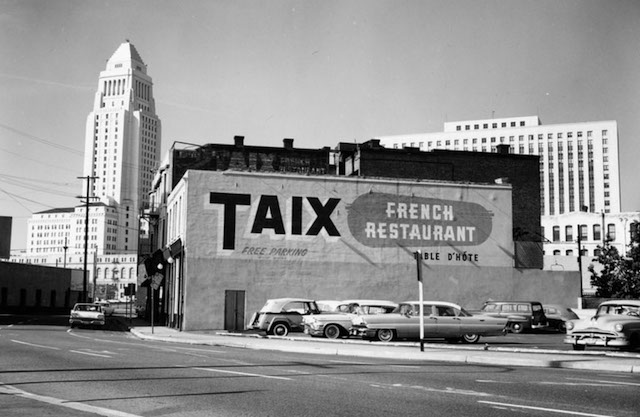 Exterior of the original Taix restaurant downtown, as seen in 1956. (Photo courtesy of the Los Angeles Public Library Photo Collection)

Taix, a classic countryside French bistro impossibly situated on Sunset Boulevard in Echo Park, is set to celebrate their ninetieth anniversary this October.

And, in typical Taix fashion, they plan to do it in style. On October 8th, the family-owned L.A. institution will be serving up a night of “Taix” roast chicken dinner specials for less than a dollar.

When Marius Taix Jr. opened Les Freres Taix french restaurant in his family's downtown hotel in 1927, chicken dinners were served for 50 cents at long “family-style” tables inside. For an extra quarter, diners could get a private table. Prices for the roast chicken au jus will be raised slightly to 90 cents on October 8th, when the restaurant celebrates their ninetieth anniversary.

Marius' sons, Raymond and Pierre Taix, opened Taix at its current location on Sunset Boulevard in 1962. Raymond's son Michael took over the restaurant in the 1980s.

“People say they don’t want change, but deep down inside they always appreciate something new that’s still presented in an old school manner,” Michael said in a statement reflecting on the restaurant's 90-year tenure. “Of late, I’ve worked hard to bring back traditional, old country French cuisine—lots of classic game fare such as beef tongue, oxtail, and lamb shanks. In fact, we were one of the first in town to serve short ribs in 1980. I call it ‘imperceptible change,’ where even the most frequent patron wouldn’t notice a difference, but the change is in there just enough to keep them coming back for more.”

The 90-cent roast chicken anniversary special will be served at Taix on October 8th from 4 p.m. to 8 p.m. Reservations will not be accepted and diners will be seated on a first-come, first-served basis (we predict long lines, so get there early). The menu for the evening’s anniversary hours will be limited to soup de jour, salad and the “Taix” Roast Chicken with au jus.