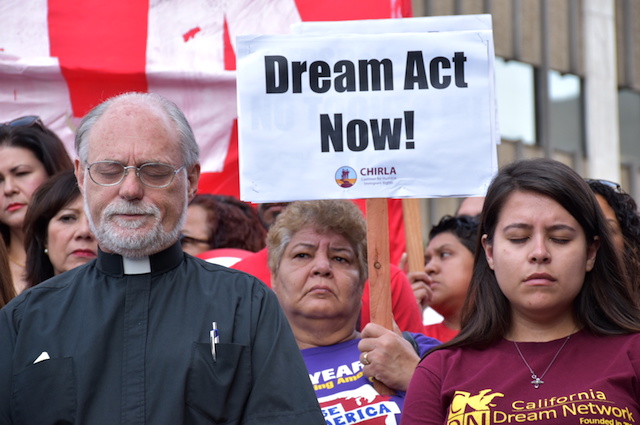 A moment of prayer at a downtown rally organized by CHIRLA on Tuesday after the Trump administration announced their decision to repeal DACA. (Photo by Julia Wick/LAist)

On Monday, the state of California filed a lawsuit against the Trump administration, challenging the administration's planned repeal of the Deferred Action for Childhood Arrivals program as unconstitutional.

California Attorney General Xavier Becerra announced the lawsuit during a press conference on Monday, five days after a coalition of 15 states led by New York and Washington filed a lawsuit over the planned repeal. On Friday, the University of California school system filed their own lawsuit against the Trump administration, alleging that the repeal of the DACA program violates the due process clause of the Fifth Amendment. UC President Janet Napolitano oversaw the implementation of DACA in her former capacity as Secretary of Homeland Security during the Obama administration.

More than a quarter of all DACA recipients live in California, which is home to more DACA beneficiaries than any other state.

“The DACA initiative has allowed more than 800,000 Dreamers, children brought to this country without documentation, to come out of the shadows and become successful and productive Americans. One-in-four of those DACA Dreamers know California as home, and it’s no coincidence that our great state is the sixth largest economy in the world,” Attorney General Becerra said in a statement.

"We will not permit Donald Trump to destroy the lives of young immigrants who make California and our country stronger," Becerra continued. "The court of public opinion has already spoken: the vast majority of Americans agree Dreamers should be here to stay; so now it's time to fight in every way we can - and on multiple fronts - in the court of law.”

California is joined by the attorneys general for Minnesota, Maryland and Maine in the lawsuit, which was filed in the U.S. District Court for the Northern District of California.

The L.A. Times reports that Becerra's lawsuit argues that the DACA program was lawful, and that its repeal will hurt the California economy.

Related: A Guide To Resources For DACA Recipients In Los Angeles
Ending DACA Would Have Disproportionate Effect On California, Home To More DREAM-ers Than Any Other State