Blizzard Entertainment Is Unveiling A Huge E-Sports Arena In Burbank 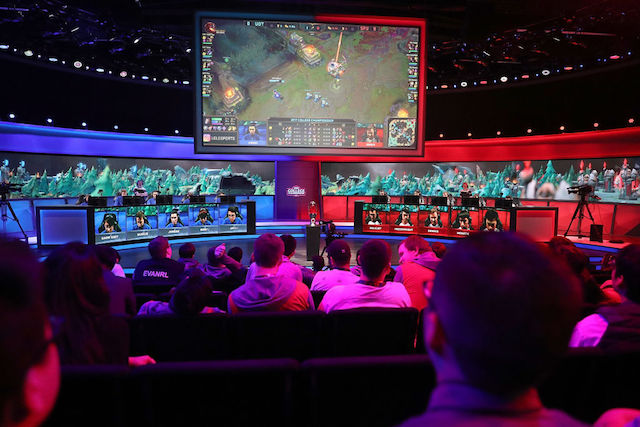 League of Legends College Championship on May 25, 2017 in Santa Monica. (Photo by Josh Lefkowitz/Getty Images)

Playing video games can be fun. Watching other people play video games? A lot of people find that fun, too. So much so, in fact, that e-sports (or competitive gaming) is on the cusp of becoming a billion dollar industry, reports Business Insider. Live tournaments at bonafide arenas are selling out, and even traditional sports networks like ESPN have begun broadcasting competitions (despite previous comments by ESPN bigwigs that e-sports is “not a sport,” according to Engadget).

Here in Los Angeles, Blizzard Entertainment (among the most well-known game developers in the world), has erected a gaming arena in Burbank, one of the world’s leading wellsprings of broadcast entertainment. As announced in a statement on Thursday, the company is set to unveil Blizzard Arena Los Angeles, which is described as “a cutting-edge, live-event destination” that’s “custom-designed and built with amenities to accommodate top e-sports competitors and their fans.” The space sounds huge, as “[multiple] broadcasts and events can be run out of Blizzard Arena simultaneously, thanks to the multiple sound stages, control rooms and player lounges throughout the facility.”

Polygon reports that the facility is located at Burbank Studios, which is where Days of Our Lives and Riverdale (among others) are being filmed. The first event is approaching fast; October 7 will see a tournament where players duke it out on the Blizzard product “Overwatch.” This will be followed by a “Hearthstone” competition on October 13. If you’re a fan, or just super curious about the e-sports explosion, you can find tickets for the "Overwatch" and "Hearthstone" competitions here and here, respectively.

Finally, to bring us back to the days of yore, here’s a video of a guy completing Super Mario Bros. in like five minutes: