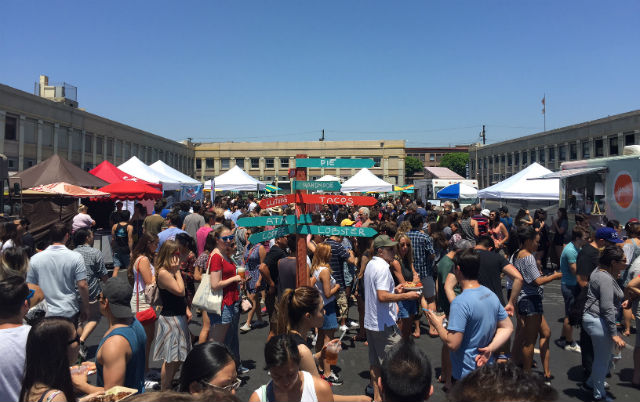 Good news, football and food fans: the very popular Smorgasburg Los Angeles is expanding beyond its Sunday home at the ROW downtown. Starting with Saturday's game between USC and Stanford, Smorgasburg will pop-up at the Coliseum for every USC and Rams game of the season.

Eater reports that the four Smorgasburg stands will be located outside Gate 16 of the Coliseum, conveniently accessible from the seats. Smorgasburg tells LAist it will offer Black Sugar Ribs, Cheezus, Lobsterdamus, and Rooster Republic at the games. Black Sugar Ribs is a popular ribs and barbecue stand, Cheezus serves up crispy and melty grilled cheeses, Lobsterdamus grills fresh lobsters on the spot, and Rooster Republic brings ever-popular hot chicken to the masses.

The stands will be open to all USC or Rams game ticket holders from the time the Coliseum opens its gates to the end of the football games. Be wary—the lines will likely be massive.

Head's up for Sunday's Rams game, though: protesters may be blocking traffic in support of Colin Kaepernick.

Related: Levitating Noodles & All The Other Things You Should Try At Smorgasburg LA