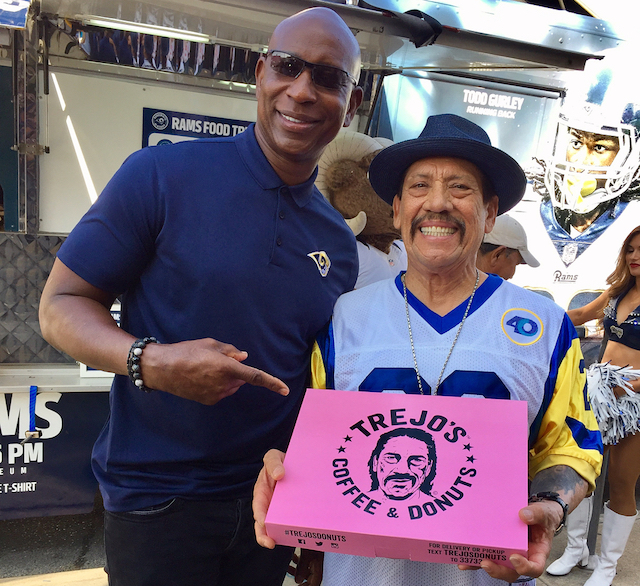 Los Angeles may not experience fall or winter, but we’ve still got plenty of seasons: Emmys season, Oscars season, fire season, and smog season among them. And as of last year—when L.A. scored its first professional football team in more than two decades—we’ve finally got our very own NFL season, too. That season kicks off on Sunday with a game against the Indianapolis Colts, and the L.A. Rams are hyping it up in the most L.A. way possible: with free tacos and doughnuts from a food truck (because it’s always food truck season in L.A.)

The Rams Food Truck made its debut on Tuesday at Trejo’s Coffee and Donuts in Hollywood—where it was greeted by doughnut shop owner and L.A. Rams mega fan Danny Trejo and former L.A. Rams running back Eric Dickerson—and will continue giving away doughnuts in the morning and tacos in the afternoon at various locations across the city through Saturday.

Trejo’s Coffee and Donuts is supplying the specialty pastries, which are football-shaped, filled with cream and decorated with royal blue and yellow glaze (L.A. Rams colors, for the uninitiated). The tacos, meanwhile—dubbed the Touchdown Taco and the Tackle Taco—will be prepared by the truck, rather than by Trejo’s namesake taco joint.
Trejo, the movie star turned restaurateur and all-around L.A. icon, created the first Rams-inspired doughnuts earlier this summer and plans to add them to the Trejo’s Coffee and Donuts’ menu, which already includes dulce de leche, horchata, and piñata cake doughnuts, on game days, according to the sports website Postgame.com. Known for grilled jidori chicken, rainbow cauliflower, and carnitas with grilled pineapple tacos, his Trejo’s Tacos food truck has been a fixture at L.A. Memorial Coliseum since the L.A. Rams’ first season kicked off last year.

Today in #LA Danny Trejo treated everyone to coffee, donuts and tacos from his Rams Truck! Did you see it? @officialdannytrejo @rams @ericdickerson29 #larams #footballanddonuts

For Trejo, whose doughnut shop has been attracting long lines ever since it opened in the former Donut Time space last May, the connection to the L.A. Rams runs deep. The Echo Park native told ESPN last year that he used to sneak into L.A. Rams games as a kid in the 1950s, hiding from cops in the bathroom before climbing up to the stadium. When the Rams returned to L.A. last year, he told ESPN, “It was kind of like part of Los Angeles came back. Los Angeles is this huge puzzle, and there was always a piece missing. Our sports team. Our football team.”

Trejo’s Rams doughnuts will be available from the Rams truck on Thursday in the San Fernando Valley, Friday in downtown L.A., and Saturday in Venice and Santa Monica. The full schedule is below, with route updates on the Rams’ Twitter feed. At each location, the Rams Truck will also give away Rams' merchandise and one pair of tickets to the season opener on Sunday.