L.A. Firefighters Who Responded To Harvey In Texas Now Headed To Alabama For Hurricane Irma 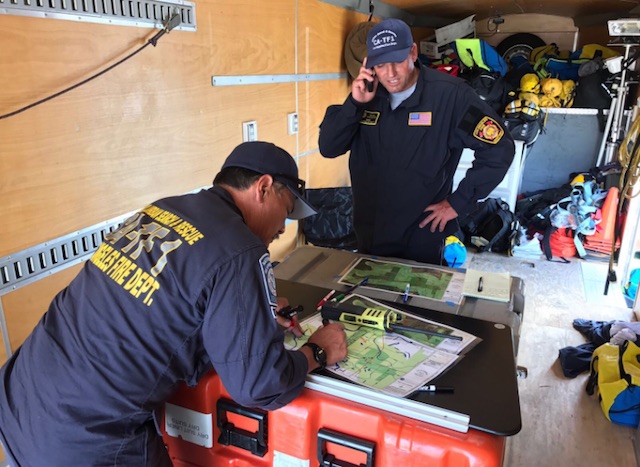 LAFD members in Texas. (Photo courtesy of @LAFDTalk via Twitter)

More than 70 members of the Los Angeles Fire Department who were deployed to Texas to assist with Hurricane Harvey response efforts will now head to Alabama to prepare for Hurricane Irma.

“These LAFD members are true ambassadors across the nation in times of great need,” said LAFD Fire Chief Ralph Terrazas in the statement. “ It is a testament to the effectiveness of our Department that we can handle one of the City’s largest brush fires while still supporting a deployed FEMA team, 11 members individually assigned to brush fires across the West, and answering more than 1,300 calls for service we receive every day.”

Hurricane Irma was described by The Weather Company as a “potentially catastrophic Category 5 hurricane.” As of Wednesday evening, the center of Irma was located around 50 miles north of San Juan, Puerto Rico.

The crew arrived in Texas early last week and conducted rescue and recovery operations in communities southwest of Houston. With other FEMA teams they rescued residents, pets, and livestock from communities inundated by the hurricane, the fire department said.

They were discharged from Harvey on Tuesday and were ordered by FEMA on Wednesday to re-route to Montgomery, Alabama, where they will stage in preparation for any damages caused by Hurricane Irma.

The team is expected to arrive in Alabama by midnight on September 7. “The team is rested, in good spirits and prepared to continue helping those in need,” according to the statement.