Season 4 of the critically acclaimed Netflix series BoJack Horseman drops this Friday, and Los Angeles is abuzz with anticipation (as well as dread of just how accurately the show will skewer our city.) In preparation, we sat down with BoJack Horseman production designer and producer Lisa Hanawalt, an illustrator who works with longtime friend Raphael Bob-Waksberg to create the show's signature blend of human pathos and animal puns (she's also the author of the 2016 book Hot Dog Taste Test). Hanawalt gave us some clues about what to expect from BoJack's fourth season, and (blessedly) talked to us about horses. A lot.

How did you get started drawing?

I started drawing pretty heavily when I was like, six. I drew during class all the time—I would sort of panic and not be able to pay attention unless I was drawing, so I think it started as a defense mechanism, a little bit. I got in trouble for it a lot, because teachers would be like, "You're not listening!" And I'd be like, "This is the only way I can listen!" I also did it to break the ice, because I was shy and it was difficult for me to meet people, so I would make drawings for people to get them to talk to me.

Did you consume a lot of cartoons growing up?

Oh, yeah. I loved Liquid Television on MTV. I loved Beavis and Butthead, The Simpsons. Ren and Stimpy was my number-one favorite, I loved all that stuff.

Drawings made while watching #TheBachelorette pic.twitter.com/X2GPwqFFsV

Who are some female cartoonists and animators you’re inspired by right now?

Oh God, I have so many. A lot of my friends and peers are artists, and I was in an all-woman cartooning studio back in New York called Pizza Island, that had so many talented women in it. I got into alt-art comics in high school, and I was really into Renee French and Phoebe Glockner. The two of them, when I read their work, I was like, here’s all this super-perverted, gross stuff, these biographical comics, written by women! That really blew my mind.

You're pretty political on your Twitter. I know political cartoons are kind of lame by default, but do you incorporate any of that sensibility into your work?

Not overtly—yeah, [political cartoons] are kind of corny, and I feel like I don’t have anything new to say there, but there’s some political stuff in my work just by nature of who I am and what I care about. I want to draw people in, regardless of what their beliefs are, so that we can come to a place of mutual understanding, of empathy. Maybe that’s sort of cheesy, but I want to talk to more people, not less. Not all of my fans, or all the people who watch BoJack, necessarily agree with me, but maybe that’s okay.

Speaking of BoJack, how does the new season compare tonally to Season 3? I feel like the show gets progressively heavier with each passing season—would you say S4 is in that same vein?

I’d say it’s both heavier and sillier. I’m really impressed with this season—all the directors and artists we had on it were even better than before, if that’s possible. Last season, I know everyone pointed to the underwater episode as the real standout, but this season, there are three or four or five episodes I’d point to as being really amazing, both in the writing and art. I get really nerdy about all the costume design in it—I like to pretend I’m a costume designer, even though I’m just drawing, and I got to research period costumes from the ‘40s.

There’s so much darkness on BoJack that the lightness of the animation feels like a gift. Do you have a favorite sight gag from the show?

It’s so hard to think of just one, but just because it’s my own sense of humor, I really like whenever there’s a particularly stupid background poster. In Season 2, Episode 7, they go to “Manatee Fair”, a women’s magazine in New York, and there are all these really dumb posters in the background that are like, “Oh my God! Belts!” I just like making fun of fashion-y stuff, the kind of stuff I’ve been exposed to my whole life, and make it look fun and stupid. I like wordplay. 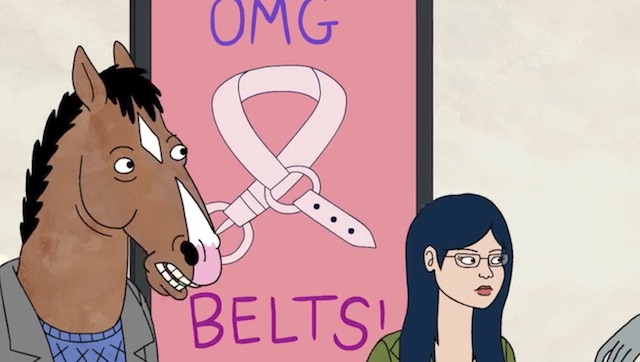 As the person who steers the ship visually, do you find yourself lightening the show's tone?

I want my drawings to be warm and to pull people in, but I respond to the heaviness of the script. Certain episodes are going to need a beautiful skyscape that communicates sadness and wistfulness, so it’s a balance between what’s more serious and what’s really silly. There are definitely scenes that are like, “Okay, BoJack is crying, we can’t have an ass in the background, in a painting.”

I think one of my favorite L.A. sight gags is when BoJack goes shopping at J'Vons.

Jon's and Vons. Are they related? What’s going on? That was literally one of the first backgrounds we ever designed when we were working on the pilot, trying to sell this thing. That was a very, very early joke.

I have a very important question for you about Martha Stewart’s confusingly named pony, on whom you're something of an authority.

Oh my God, Ben Chunch! It's either Ben Chunch or Baen Chunch; her grandchildren named him. I was going to meet him and write about it, but then it all fell through because Martha was in Italy or something.

I would pay good money to read your celebrity profile of Martha Stewart’s horse Ben Chunch.

I just want to ride him. (Laughs)

Do you ride regularly?

Yeah, I do. (Sighs) I love horses, they’re great. Sometimes I wish I didn’t like them, because they’re kind of dangerous—the horse I usually ride is pretty sane, but last time I rode, she spooked because she saw a bucket where there’s usually not a bucket, and that’s enough to frighten a horse very deeply. They’re so skittish, it’s crazy, but so am I, so I kind of relate to them.

Do you have a favorite pop culture horse, BoJack excluded?

I love War Horse. The other day, I was joking that I would really like a sequel called Son of War Horse, and my boyfriend was like, "It should be called More Horse." I’m jealous because we keep seeing these Planet of the Apes movies come out, and they’re my boyfriend’s favorite movies, and I hate them, but I go to see them with him because I’m nice. I just want there to be an equal franchise that’s only horses.

They really need to churn out some more National Velvets.

Oh my God, I love National Velvet. I’ve seen, like, every horse movie ever, so many times. One time I made a chart of every horse movie, and then I marked off which ones had Mickey Rooney in them, and it was like, half of them.

There’s actually a horse movie from my childhood whose name I can’t think of, and I feel like you, out of everyone in the world, would know it. The girl dives on her horse, and she goes blind…

It's Wild Hearts Can’t Be Broken.

Wow. You’re The Horse-movie Whisperer. Is jumping off a diving board on a horse a real thing?

Yes! The movie was based on a true story. They used to do that in, like, Atlantic City, which is so insane to me. How did they even train the horses to do that?

I used to be riddled with anxiety that I would go blind from jumping off a diving board on a horse.

I mean, that’s my nightmare. That might be why I got scared of riding in the first place.