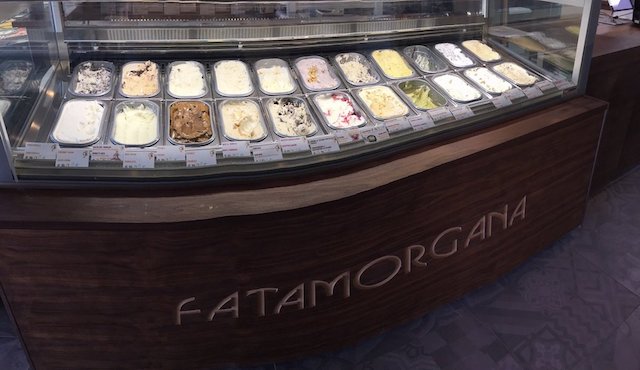 Some of the gelato flavors at Fatamorgana in Studio City. (Photo by Allegra J. via Yelp)

After a week of record-breaking heat, L.A. is finally getting some sweet relief. Fatamorgana Gelato, one of Rome's most popular scoop shops, just opened its first U.S. location in Studio City, LA Weekly reports.

Fatamorgana founder Maria Agnese Spagnuolo serves up 64 classic gelato flavors—including pistachio, mint chip and the pleasantly Nutella-reminiscent nocciola (a.k.a. hazelnut)—from a space on Ventura Boulevard that once housed a hair salon. The fully gluten-free gelato shop also offers a handful of unconventional options (try the carrot cake) and no less than seven different variations on chocolate.

Even in a city teeming with world-class gelaterias, Fatamorgana is a local favorite; the gelato chain has locations in Prati, Trastevere, and three other Roman neighborhoods, and constantly tops lists of the best gelato in Rome. Gelato is basically a milkier, less cream-heavy version of ice cream, in case you never had a college friend study abroad in Italy and return home to dessertsplain the difference to you ad nauseam. (We're glad you had fun in Tuscany, Zach, but give it a rest.)

Fatamorgana's Studio City location has been open for just a couple weeks, but the Roman gelato chain is already "looking to expand to other locations in L.A.", a company spokesperson told LAist on Tuesday. Sounds like the Museum of Ice Cream is going to need to open up a gelato wing.