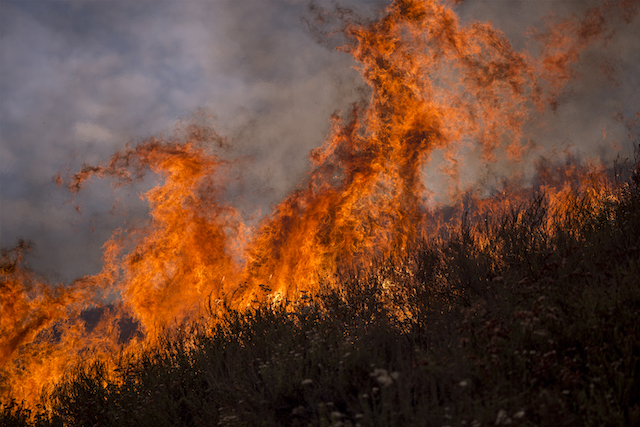 Updated 1:08 p.m. Governor Jerry Brown has signed a state of emergency for L.A. County in response to the La Tuna Fire. The proclamation directs state-wide resources and personnel towards assisting in the La Tuna Fire, which has remained at 10% containment since Sunday morning.

Mayor Eric Garcetti signed a Declaration of Local Emergency Saturday night to address the La Tuna Canyon fire that continues to grow and blaze through the Verdugo mountains. In the declaration, he also requests Governor Jerry Brown declare an emergency in order to expedite federal and state assistance. Officials believe this fire to be one of the largest by acreage in L.A. city history.

As of Saturday night, the fire had grown to 5,895 acres and LAFD has assigned 800 personnel to combat the blaze, which began as a brush fire on Friday afternoon. The total number of personnel exceeds 1,000, according to ABC, because firefighters from multiple agencies are assisting the LAFD on the scene.

The fire has destroyed three homes in Tujunga, according to the L.A. Times, and two firefighters were hospitalized for dehydration. Evacuation orders in Burbank were lifted Saturday night, according to the LAFD, but mandatory and voluntary evacuations in Glendale and L.A. were still in effect. New evacuation orders for parts of Burbank—namely the Burbank Estates and Castleman Lane areas—were put in place late Saturday.

With erratic winds and temperatures in the high 90s and low 100s all weekend, fire officials have found themselves battling an extremely difficult fire. "If there’s no wind, this is a relatively easy fire to put out. But when the wind changes, it changes our priorities because other properties become at risk," according to Los Angeles Fire Chief Ralph Terrazas, as reported by the L.A. Times. The fire remains at 10% containment as of Sunday morning.

A smoke advisory remains in effect for the regions surrounding the La Tuna fire.

The cause of the fire is still unknown.