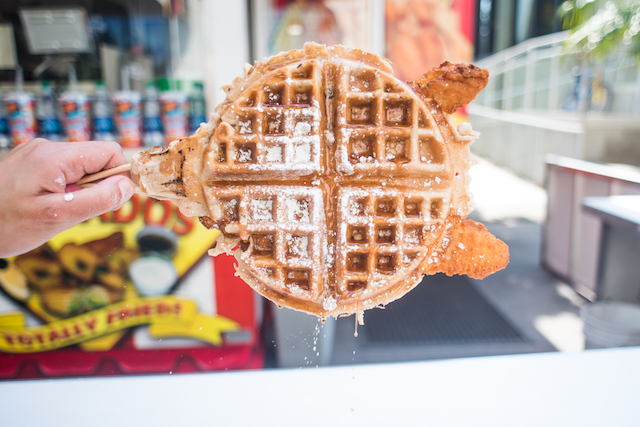 The L.A. County Fair kicked off its weeks-long festivities this weekend and the food vendors showed up with another round of absurd delicacies. Despite the oppressive feat at the fairgrounds in Pomona, attendees gorged on fried chicken, bacon-wrapped vegetables, dole whip, ice cream, and some absurd new levels of fried goodness: fried meatballs, pizza, and even fried burritos.

Flamin' Hot Cheetos also made a strong appearance at the fair because everyone dreams of reliving middle school snack trades (where are the Takis though?). Also, if you want to die of a heart attack on the spot, may we recommend a triple decker cheeseburger with donuts as the bun?

Make sure to stay hydrated while indulging on all the food the fair has to offer. You wouldn't want to pass out from heat stroke and end the calorie whirlwind you had planned for the day. Also, maybe do the rides first before eating?

The county fair only happens once a year, so don't hold back. Get that ice cream sandwich and chase it with chicken and waffles on a stick. After all, our city is literally on fire, so what do you have to lose?

The County Fair is located at the Pomona Fairplex at 1101 W McKinley Ave in Pomona. It runs from September 1-24 and is closed on Mondays and Tuesdays, with the exception of Labor Day. Admission costs $14 for adults on weekdays and $20 on weekends. Tickets are available here.