Everything You Need To Know About The L.A. County Fair 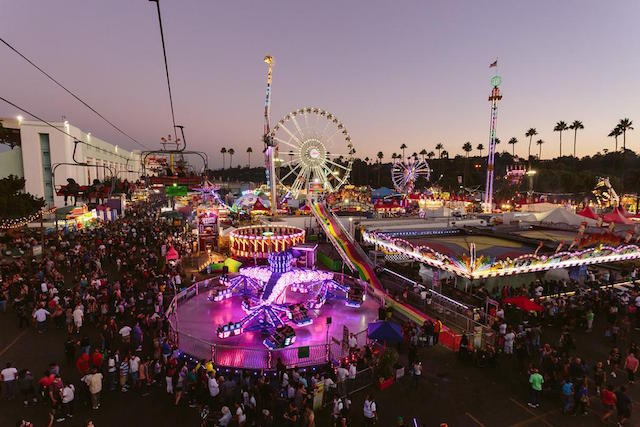 Alright Los Angeles, the best month in the city has arrived. Every year at the Fairplex in Pomona, the Los Angeles County Fair holds court for weeks of fried food, games, fake rural activities, and a concert lineup to rival most major festivals. If you have never been, now's the time to embrace the greatest cultural event Los Angeles has to offer. It can be an intimidating experience, but we're here to guide you gently into that good night.

What is the county fair?
County fairs happen all over the country and are usually the emblem of American gluttony, agriculture, country music, and its tradition of weighing animals. The L.A. County Fair takes the national tradition and turns it up several notches—typical L.A., stealing all the glory—by turning what is normally a weekend-long event into a month of bacchanalia. The L.A. County Fair started in 1922 as a five-day fair at the Pomona Fairplex. Over the course of the 20th century it saw immense growth, visits from standing presidents, and the Fairplex served as army facilities during World War II. Many of the facilities were also built by the Works Progress Administration in the 1930s. It transformed into its current iteration in the 2000s, ushering in a whole new generation of County Fair intensity.

Where is the county fair?
The County Fair is located at the Pomona Fairplex at 1101 W McKinley Ave in Pomona. It runs from September 1-24 and is closed on Mondays and Tuesdays, with the exception of Labor Day. Admission costs $14 for adults on weekdays and $20 on weekends (you can find tickets here). A season pass is also available for $29.99. On opening weekend, the fair will stay open until midnight every night. After that, it'll be open until midnight on Fridays and Saturdays, until 11 p.m. on Thursdays, and until 10 p.m. on Wednesdays and Sundays.

How do I get to the county fair?
If you plan to drive, the Fairplex is accessible via the 210 and 10 freeways. Parking costs $15 and there are three lots available: one off Fairplex Drive, one off McKinley Drive, and one off White Avenue. If you plan to attend the fair often, a $60 season parking pass is also offered.

What do I do at the county fair?
In the words of the fair itself, "Whip out your stretchy pants, because the Fair and food go hand in hand. Get ready to take a break in that diet and indulge in bacon fried s’mores, fried hot sauce, frog legs and craft beer." Eating at the fair is only one part of the experience, though. The "experiences" at the fair include The Taylor Swift Experience presented by the Grammy museum (which we encourage attending with a strong dash of skepticism); Judithe Hernández and Patssi Valdez: One Path Two Journeys, an art exhibit collaboration with the Getty and Pacific Standard Time LA/LA program; The Igloo for summer ice skating; and The Farm for all tiny animal ooh-ing and ah-ing. Most of the attractions are free or cost $5 plus the cost of fair admission.

Every day the fair offers a number of events, attractions, performances, and shopping opportunities. The best way to stay abreast of all the possible activities is via the website's event finder. There's a different parade every day and even a daily circus with aerial and side shows. The fair also includes a carnival with rides and games. Wristbands are available for access to the rides and it's possible to buy 40-200 game tickets at a time. Ever dreamed of romantically shooting at bottles and getting an oversized bear for your date? Now's the time to achieve this evergreen goal.

The fair also has an absurd concert line-up, featuring artists like Boyz II Men, Queen Latifah, Fifth Harmony, and Migos. Styx is also back for the millionth time, confirming our suspicion that the band exists exclusively for appearances at the L.A. County Fair. The full schedule is as follows:

What else should I keep in mind?
Unless you live in a bubble of central air, you've probably noticed L.A. has been insanely hot. Make sure to be especially careful at the fair during this heat, staying hydrated and wearing plenty of sunscreen. Here are some heat safety tips from the Los Angeles County Fire Department.