What Would A 4 A.M. Last Call Look Like In Los Angeles? 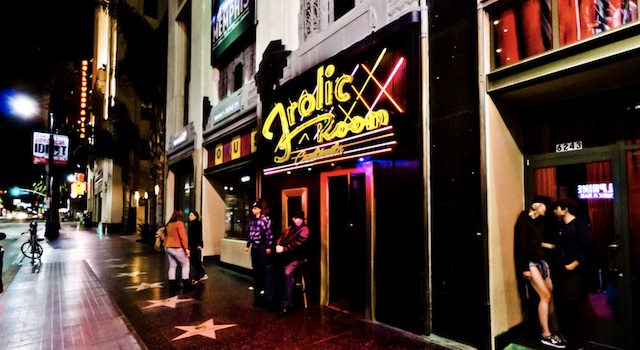 The Frolic Room in Hollywood. (Photo by Marc Evans via the LAist Featured Photos pool on Flickr)

A controversial bill to extend last call until 4 a.m. at California bars and restaurants will be heard before a state assembly committee tomorrow, but it's not without local opposition. Drafted by Senator Scott Wiener (D-San Francisco), Senate Bill 384—also known as the Let Our Communities Adjust Late Night (LOCAL) Act— would allow, but not require, bars and restaurants in California to serve alcohol two hours past the current last call time of 2 a.m.

One opponent of SB 384 is Los Angeles City Councilman Paul Koretz, who held a press conference at City Hall on Thursday to express his objections to the bill. "We'll get more revenue as a city if we stay open until 4 a.m., but the offsetting cost to local municipalities will be greater," said Koretz, who was joined by representatives from the Westside Impact Coalition, the California Alcohol Policy Alliance (CAPA) and The Wall Las Memorias Project. Koretz suggested the bill would place an undue burden on local law enforcement and ultimately pose a threat to public safety, saying, "Five or ten years after [SB 384] passes, I will believe we will reverse it—over the objections of a powerful alcohol lobby—but who knows how many people will die in the meantime?"

Koretz's concern about the impact SB 384 would have on law enforcement was echoed by the Los Angeles Police Protective Union. "Los Angeles does not have enough police officers now to respond to 911 calls, and extending last call at bars to 4 a.m. will only make matters worse. With more alcohol consumption comes more DUI incidents, more assaults, and more trouble in and around bars open that late," police union spokesperson Tom Saggau told LAist Thursday.

The public nuisance aspect of a potential 4 a.m. last call was also brought up at Thursday's press conference, with Richard Zaldivar, founder and executive director of The Wall Las Memorias Project, asking, "Who's going to want to live next to a place where there are expanded liquor hours? If anyone has any questions about that, go downtown—go to 6th and Main, where I used to live." Zaldivar dismissed the local control aspect of the bill, which would allow individual cities in California to decide for themselves whether to extend last call to 4 a.m., as "fake news."

Some local advocates dispute Koretz's claim that the passage of SB 384 would significantly increase alcohol-related risk in Los Angeles. "A 2 a.m. last call encourages people to pound their drinks and pour out into the streets all at the same time, and that kind of fast drinking and lack of oversight from security and bouncers leads to a lot of DUIs, drunken scuffles, violent altercations," Ace Katano, a defense attorney in Los Angeles who works with alcohol-related crimes, told LAist on Wednesday.

Bars and restaurants do stand to gain revenue from the passage of SB 384, and some hospitality experts say the extra profit isn't necessarily at odds with public safety interests. Eddie Navarrette, a senior consultant at FE Design & Consulting who specializes in hospitality permitting and has worked with L.A. bars and restaurants including Salazar, Arts District Brewing Company and Hotel Erwin, told LAist on Thursday, "People are going to drink no matter what—at home, in after-hours clubs, in parking lots, in public parks. Why not give those people two extra hours in a safer, controlled, regulated environment?" Navarrette noted that SB 384 would grant individual cities the option to implement a 4 a.m. last call, but the number of California bars and restaurants who actually chose to do so would likely be in the minority.

Public reactions to a 4 a.m. last call in L.A. vary, with the bill's supporters pointing to New York, Washington D.C. and Chicago as urban hubs bolstered by later closing times. The L.A. Times editorial board came out in support of the bill on Wednesday, pointing out that the 2 a.m. last-call mandate in California is based on an antiquated law that dates back to 1935.

"It’s the age of Uber. Drunk driving is on the decline. I think a 4 a.m. last call would go a long way towards making L.A. a nightlife destination. I know when I moved here from New York I immediately felt the loss," Nick Theodorakis, a film producer who lives in West Hollywood, told LAist.

Extending last call also has the potential to build inclusive spaces for marginalized communities; Senator Wiener, the bill's author, told the LA Times in March, “Nightlife plays a critical role in what makes cities unique. Especially for LGBT people, nightlife helped us find our community. It matters a lot.”

"“The LOCAL Act recognizes that cities like Los Angeles could benefit - if it chooses to do so - from developing a plan to expand nightlife in neighborhoods like Downtown LA," Senator Wiener said in a statement last week. Kelsey Goldberg, agitprop co-chair of the Democratic Socialists of America (DSA) Los Angeles chapter, cited the potential benefits of "more eyes on the street" at late hours in downtown L.A., pointing to Redwood Bar & Grill owner Christian Frizzell's recent assault on a homeless man as a situation that might have been deescalated by the presence of more foot traffic in the area.

The State Assembly's Appropriations Committee is expected to vote on the bill on Friday, September 1, according to a representative from Senator Wiener's office. If the bill passes through the Appropriations committee, it will go to the full Assembly for review. The bill was already approved by the state Senate in May. If SB 384's supporters succeed, Los Angeles could implement a 4 a.m. last call as soon as January 2020.

Update [Friday, 4:43 p.m.] The State Assembly's Appropriations Committee rejected SB 384's proposal to extend last call to 4 a.m. in a vote on Friday, instead revising the bill's language to create a task force to look further into the matter. The task force will report back to the Legislature by the end of 2019.