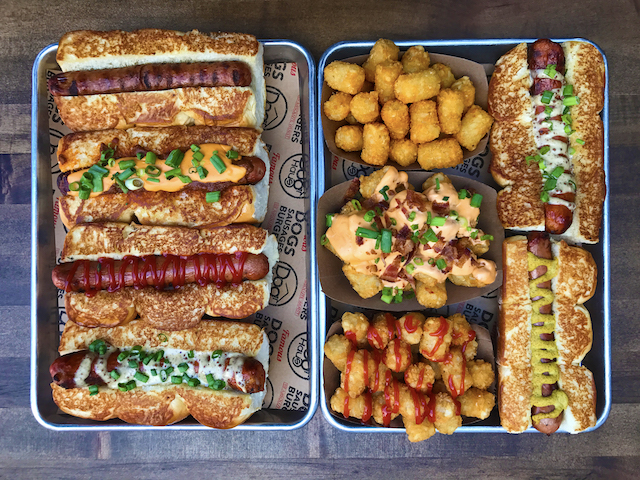 A look at what's new at the Rose Bowl. (Photo courtesy of Dog Haus)

It's the 21st century, and the experience of watching sports live is something of an immersive affair. Arenas and stadiums come replete with shopping centers and cineplexes. As for the food, hot dogs and peanuts are now accompanied with honey lavender biscuits and quinoa salads (per Staples Center).

So it's perhaps overdue that, for the first time ever, the Rose Bowl is bringing in an outside vendor to provide a new dining option. Dog Haus, that purveyor of tots and outsized dogs, announced Thursday that they will start plying their wares on September 3 at the start of the UCLA football season. There's a bit of shared fraternity here, as Dog Haus opened its first shop in 2010 in the Pasadena area (where, obviously, the Rose Bowl has resided for 95 years).

Those who are familiar with Dog Haus know the drill: the dogs come in a toasted and pillowy fold of King’s Hawaiian rolls. The selling point is pretty self-evident here, but the joint takes it up a notch by making the dogs unique. Menu items will include the "Oktoberwürst," which includes a Cajun-spiced, Emmentaler cheese-stuffed Bierwürst that's topped with mustard aioli and chopped green onions. There's also the "Long Snap," which is a marriage of the house chili, cheddar, and green onions. Dog Haus will also be bringing their crispy tots, as well as a rotating roster of beers (though this will only be for concerts, and not UCLA football games, for the obvious reasons).

As stated in a release, "The Rose Bowl is now looking to improve the dining experience with Dog Haus leading the way," which suggests that we may see other options popping up in the future. The stadium may be following in the steps of the Staples Center, which currently has, among other things, a BS Taqueria and Ludo Lefebvre's pet project LudoBird.