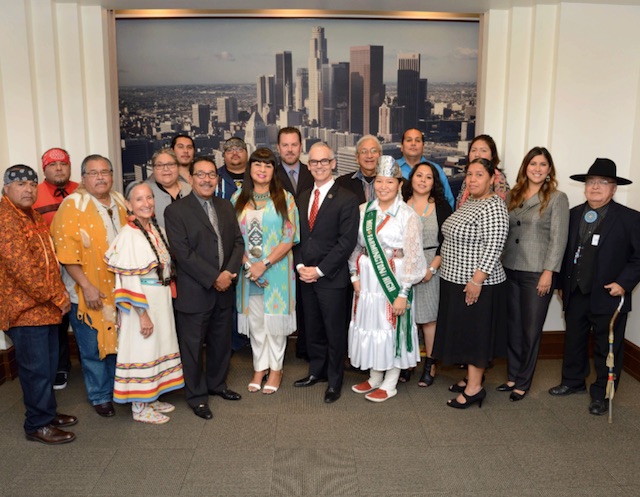 Councilman Mitch O'Farrell (center in black suit and glasses) with a group that had presented on culture and traditions of Native Americans in the City of Los Angeles in 2015 at City Hall. (Photo courtesy of Mitch O'Farrell's office)

The L.A. City Council approved a motion Wednesday to replace Columbus Day (which is celebrated on the second Monday of every October) with Indigenous Peoples Day in the city of Los Angeles.

The vote will also install an Italian American Heritage Day to be observed on October 12 of each year, and instructs the city clerk to send a letter to LAUSD indicating that the city now observes Indigenous Peoples Day, and advising the school district to do so as well.

The vote ensures that Indigenous Peoples Day will be made an official city holiday by the 2019 calendar year, meaning it may not take effect this coming October, according to Tony Arranga, communications director for councilman Mitch O'Farrell. O'Farrell introduced the motion two years ago to install Indigenous Peoples Day in place of Columbus Day.

While observance of Columbus Day varies across the country (it was nixed as a state holiday by then-Governor Arnold Schwarzenegger in 2009), in L.A. it is regarded as a legal city holiday, meaning city workers get paid time off. This means that Indigenous Peoples Day will also be an official city holiday for city workers. Italian American Heritage Day, however, will not be designated as a paid holiday.

Debate over the validity of Columbus Day has been stewing for decades, to say the least. To many, the holiday is a farce. There's the myth that Columbus somehow "discovered" America when the land had already been occupied for millennia. This may be a moot point though, as Columbus never actually set foot on North America (he landed in the Bahamas and an island that was later named Hispaniola, and is now split into Haiti and the Dominican Republic).

"We should question why we as Americans continue to celebrate him without knowing the true history of his legacy, and why a holiday was created in the first place. He never landed in the USA," Dr. Leo Killsback, a citizen of the Northern Cheyenne Nation and assistant professor of American Indian Studies at Arizona State University, told CNN in 2016.

To others, however, Columbus Day is less about the namesake, and more about the long history of Italian heritage in the United States. The holiday started after a group called the Knights of Columbus, a Catholic service organization consisting largely of Italian Americans, lobbied hard for the creation of the holiday—President Franklin D. Roosevelt would later deem October 12, 1937 as the first Columbus Day. When the L.A. City Council tried to replace Columbus Day with Cesar Chavez Day in 2002, several prominent Italian Americans, including former Dodgers manager Tommy Lasorda, signed off on a letter that condemned the action, according to the L.A. Times.

When O'Farrell introduced the motion in 2015, Councilman Joe Buscaino, who is Italian American, responded by saying, “I support the creation of Indigenous Peoples Day here in Los Angeles...but not at the expense of another cultural heritage."

Several public speakers at Wednesday's council meeting reiterated Buscaino's words, saying that replacing Columbus Day with Indigenous Peoples Day would, at least symbolically, pit one group against another. "I think it's a cramped and limited view of history," said attorney Tom Cacciatore, speaking on the public's association of Columbus with colonialism. "I want to salute the demonstration of the Native Americans outside the building. But I ask that [the council] not create a racial conflict. That proposal by Mr. O'Farrell would create a rift. We have no animosity toward the Native American people."

Others followed Cacciatore in putting distance between Columbus Day and what historians say is the explorer's record of slavery and oppression. "For two years I've been in support of Indigenous Peoples Day. We don't want it to be at the expense of Columbus," said Ann Potenza, President of Federated Italo-Americans of Southern California. "Columbus is on trial because of slave and genocide that happened since then," said Potenza, adding, "We had a Civil War, we put that to rest in this country."

Other speakers came in support of replacing Columbus Day, saying that the holiday honored a symbol of oppression and colonialism. "The creation of Indigenous Peoples Day is an act of restoring historical justice. Failing to do so would engender the opposite effect," said Shannon Speed, a professor at UCLA who identifies as a citizen of the Chickasaw Nation.

"We're talking about identifying the people who come from here," added Rudy Ortega, who also spoke in favor of the establishment of Indigenous Peoples Day. "This is my ancestors' lands. I have nowhere to go. I know that, for Italian Americans, your contributions have to be acknowledged as well."

"What I don't support...is replacing the underlying meaning behind a holiday that is important. There's social and cultural importance to Italian Americans," said Buscaino, who requested an amendment to the motion that would establish Indigenous Peoples Day on August 9 instead (the United Nations recognizes August 9 as International Day of the World's Indigenous Peoples). That amendment would also establish an "Embrace L.A. Day" in place of Columbus Day, reports CBS2. O'Farrell opposed this request, however, saying that it "relegates an entire movement and process and throws it under the bus." Buscaino's proposed amendment was voted down by the council.

The council ultimately voted 14-1 to replace Columbus Day with Indigenous Peoples Day. "I teach my son to apologize and to know when to make amends," said councilman Mike Bonin, who voted in favor of swapping the holidays. "And replacing [Columbus Day] is a small step towards apologizing and making amends."

As noted at Splinter, L.A. joins a growing list of major cities to replace Columbus Day with Indigenous Peoples Day. Phoenix did so in 2016. Before that, Portland, Seattle, Oklahoma City, Albuquerque, and Denver, among others, have also made the change.