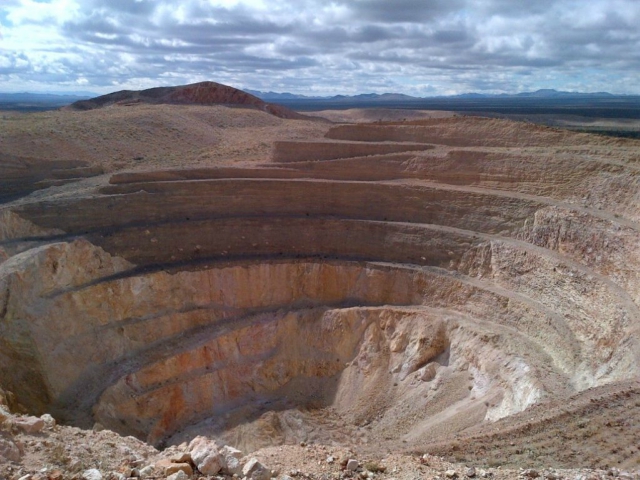 Newcastle's mine in the Mojave desert (Photo courtesy of Newcastle Gold)

Newcastle Gold Ltd., a Canadian gold mining firm that operates a mine in the Mojave desert, has allegedly shifted its position on the creation of the Castle Mountains National Monument; while the firm once publicly supported the designation of the monument, new reports suggest the company is seeking to have the borders of Castle Mountains shrunk. Gerald Panneton, chief executive of Newcastle, has stated that the national monument's current borders were marked without proper consultation with the company, and that it may hinder their ability "to explore and grow,” according to the Los Angeles Times.

In February 2016, then-President Barack Obama used the Antiquities Act to formally designate a roughly 21,000-acre site of California's Mojave desert as the Castle Mountains National Monument. The borders of the monument surround, but do not include, an 8,300-acre parcel gold mine owned by Newcastle. The gold mine was shuttered over a decade ago due to low gold prices, reports The Desert Sun, but now Newcastle is looking to reopen it. According to the Times, President Obama's designation of the Castle Mountains monument allowed Newcastle to continue with its plans to extract 10 million tons of ore from the site through 2025.

“The company appreciates that it has been consulted throughout this process,” Newcastle said in 2016 of the new monuments borders, notes the Times. “The new land designation reflects a compromise position that meets our needs as well as respecting the interests of other stakeholders in the area.”

In April 2017, President Donald Trump signed an executive order calling on the Interior Department to review the designation of 27 national monuments under the Antiquities Act—including Castle Mountains.

“To ask for Castle Mountains to be put under review is really surprising because an agreement was hammered out,” David Lamfrom, a director with the National Parks Conservation Association, said, notes the Desert Sun. “The public has weighed in and said they want these places to be protected.”

According to the Times, both Newcastle and Rep. Paul Cook (who represents the Congressional district encompassing Castle Mountains), have called for a reduction to the borders of the national monument.

In an op-ed published in the Desert Dispatch, Rep. Cook accuses President Obama of creating Castle Mountains National Monument "out of thin air," and by using an "abusive process" to do so that did not solicit the input of stakeholders or the public.

"My position on Castle Mountains has never changed: no monument should be created without public input," Cook continues.

According to the Times, Panneton, who joined the firm following Castle Mountains' designation, confirmed that the mining company met with Secretary of the Interior Ryan Zinke in June about reducing Castle Mountains National Monument by some 50%. Panneton said the company's previous statement was “words used to calm investors.”

“There were never adequate consultations with us,” Panneton continued.

The Trump administration is still reviewing the designation of Castle Mountains. Rep. Cook has suggested that the land should return to the Bureau of Land Management, but that any protective designation should incorporate public input.

As Cook told the Desert Sun, the "...discussion must be facilitated through legislation and public outreach, not behind closed doors, such as it did during the Obama administration.”