20 Of The Coolest Events Happening In Los Angeles This Week

The Moth Grandslam is on Monday night in DTLA where you can hear stories like the one above.

Here are 20 of our favorite events happening in L.A. this week.

TEQUILA INTERCHANGE PROJECT (Food + drinks)
The Ponte’s Bar Director Ryan Wainwright and his bar team will donate all tips from the bar on Monday night to TIP (Tequila Interchange Project). The project supports the preservation of sustainable, traditional and quality practices in the tequila and mezcal industry through TIP’s Bat Friendly Project. Wainwright serves up special drinks crafted for the evening that feature Tequila Ocho, Siembra Azul and Siembra Valles.

SUDDEN FEAR (Film)
On Tuesday at 7:30 p.m. at the Ahrya Fine Arts Theatre, there’s a 65th anniversary screening of Sudden Fear (1952). The noir film is one of Joan Crawford’s most memorable performances as she stars as a successful playwright who falls in love with an actor she rejected for a lead role in her latest play. There are scary twists and turns ahead for the both of them. Tickets: $15.

PUB QUIZ TUESDAYS (Drinks + trivia)
The Cat and Fiddle Restaurant & Pub, which catered to British expats, industry folks and neighbors in Hollywood for 35 years, re-opened (in a different location) and has now reinstituted its Pub Quiz Tuesdays. There is no buy-in to play, but there is a $75 prize for the night’s winners. Everyone who plays gets a voucher for $2 off any Ketel One Moscow Mule or pint of Guinness. 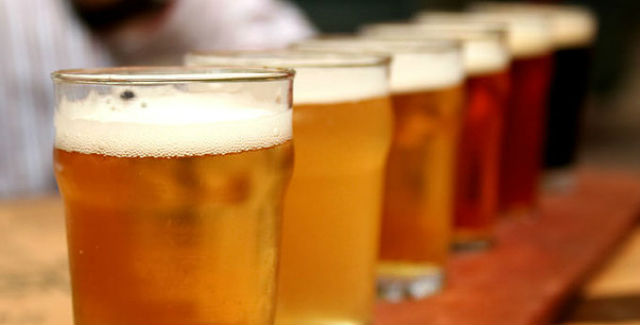 SCHMABARET (Comedy + music)
Schmabaret! an offbeat cabaret starring Adam Ceschin and Carolyn Jania returns to Bar Lubitsch on Tuesday at 8 pm. They’re joined by Jenna Brister, who hosts, and Aaron Wilson on the keyboards. The variety show started at iO West in 2015 and has expanded to include original comedy songs that cross all genres of music. Admission: $10.

REBEL IN THE RYE (Film)
KCET’s Cinema Series returns to the Aero Theatre in Santa Monica every Tuesday at 7 p.m. featuring films prior to their L.A. theatrical release. Hosted by film expert Pete Hammond, each screening is followed by a Q&A with the film's talent and filmmakers. This week, the series presents Rebel in the Rye with writer-directory Danny Strong. The film is based on the book J.D. Salinger: A Life.

TOMATINA FESTIVAL (Food)
The Bazaar by José Andrés at the SLS Hotel Beverly Hills hosts its first Tomatina Festival from Wednesday through Sept. 5. Chef de Cuisine Holly Jivin serves up a seasonal 12-course tomato-centric tasting menu in honor of the annual Spanish event La Tomatina. The tomato tossing fest of Buñol, Spain, has taken place on the last Wednesday of August since 1945. Tickets: $72 a person.

MONDO COZMO (Talk + music)
The Grammy Museum puts Mondo Cozmo in the spotlight on Wednesday night at 8 p.m. The alt-rock rising artist will be in conversation with Executive Director of the GRAMMY Museum Scott Goldman about his debut album Plastic Soul. The discussion’s followed by a live performance. Tickets: $15.

BRYAN CRANSTON (Book talk)
On Wednesday at 7 p.m., the Downtown Central Library in Glendale welcomes actor Bryan Cranston who’ll be in conversation with KPCC’s John Horn as they discuss Cranston’s memoir, A Life in Parts. The book traces Cranston’s journey from a chaotic childhood to Hollywood stardom. The Library closes at 5:30 p.m. and reopens at 6 p.m. Cranston will only sign books after the discussion; no memorabilia, posed photos or flash photography.

CINECON 53 (Film fest)
The 53rd annual Cinecon Classic Film Festival and memorabilia show takes over Hollywood over Labor Day weekend (Thursday through Sept. 4). Cinecon showcases old and unusual short and feature films that are rarely given public screenings. Screenings take place the Egyptian Theatre with the memorabilia show at the Loews Hollywood Hotel. The opening night includes a welcome reception at 5 p.m. at the Egyptian’s courtyard, followed by an intro, music and chat with Norman Lloyd and a screening of Buster Keaton’s Steamboat Bill, Jr. (1928) with live accompaniment by the Famous Players Orchestra. Cinecon does not sell tickets to individual films, but they do offer full-day passes ($40-$50) at the door for the five days of the festival. Full festival passes are $200. Memorabilia Room entrance is $10.

LA OPERA AT UNION STATION: CARMEN (Opera)
There’s a treat for commuters and visitors to Union Station on Thursday from 5-7 p.m. as Metro Art collaborates with the LA Opera to present an exclusive preview of Georges Bizet’s classic opera Carmen. The free performance takes place at the station's Historic Ticketing Hall as it’s transformed into the south of Spain. The LA Opera’s production of Carmen opens Sept. 9 at the Dorothy Chandler Pavilion.

FOLLOW THAT! (Comedy)
Follow That! is at NerdMelt Showroom and pits LA’s best comics against the saddest/emotionally charged videos on the web on Thursday at 9 pm. The comics and the audience watch the most emotional videos on the web and then the comedians get eight minutes to bring the audience to tears (of laughter). Lineup includes: Mike Lawrence, Sofiya Alexandra, Taylor Tomlinson, Matt Kirshen, Andre Hyland and Brodie Reed. Tickets: $8, $10 at door.