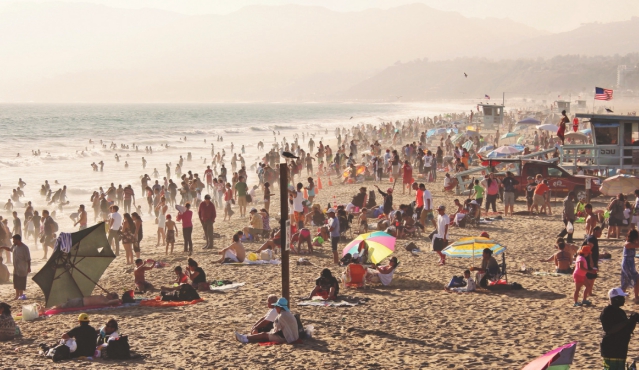 Need a reminder that summer comes late in Los Angeles? It's about to get hot. Really hot.

An excessive heat watch issued by the National Weather Service will begin for all of Los Angeles County on Sunday, as a high pressure system builds over the Great Basin. Temperatures will climb to the mid-90s and into the triple-digits for Downtown Los Angeles, Bonnie Bartling of the NWS told LAist. For the valleys and deserts, expect temperatures Sunday to already be between 100 and 110 degrees. The beaches should be spared a bit, with highs in the mid-80s.

Bartling adds that the heat wave is expected to peak Monday through Wednesday, with highs staying in the triple-digits for most of the county expect the beaches. As for overnight lows for the coming days? Expect it to cool off into the 70s for the L.A. metro area, and only into the 80s for the foothills. Blech, that's not much relief.

“When temperatures are as high as they will be in the next few days, even a few hours of exertion may cause severe dehydration, heat cramps, heat exhaustion and heat stroke," Jeffrey Gunzenhauser, Interim Health Officer for Los Angeles County said in a statement emailed to LAist. "Others who are frail or have chronic health conditions may develop serious health problems leading to death if they are exposed to high temperatures over several days.”

In other words, please remember to stay hydrated and cool in this intense heat, especially if you have any chronic health conditions.

Is such a heat wave common this late in August? "Yes, but August has been relatively cool, this year" Bartling told LAist. "And September is a really hot month." Oh, joy.

As to when this heat wave will break? "Well, it's not going anywhere anytime soon. There's another high pressure system on it's heels, so, we might get some relief, but only by a few degrees."

Find your nearest public pool, or book your tickets to the Museum of Ice Cream, now, because this heat is going to be around at least through Labor Day weekend.