Angels Flight Is Returning Next Week 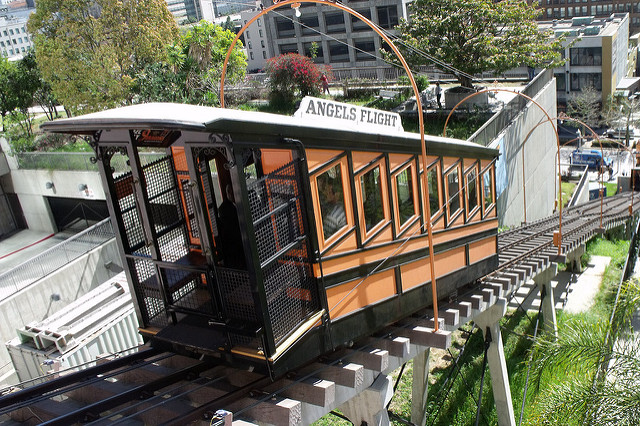 The four-year wait is over: the Angels Flight funicular will reopen to the public on Thursday, August 31.

The famed downtown Los Angeles landmark has been undergoing renovations lately, following Mayor Eric Garcetti's March announcement that the self-proclaimed shortest railway in the world would be operational again by Labor Day.

As detailed by Los Angeles Downtown News, a public-private partnership was formed by ACS Infrastructure, engineering firm Sener, and the non-profit Angels Flight Railway Foundation to create the Angels Flight Development Company. The AFDC has spent about $5 million updating the funicular, and is currently awaiting final approval by the California Public Utilities Commission. The last few months have seen an emergency stairway added to the rail line, along with an upgrade to the motors and other systems.

"I will be here riding it myself. That's how confident I am in these engineers," Garcetti said at the March press conference ahead of the overhaul.

Angels Flight originally opened at Hill and Third Streets, one block north from its current location, in 1901—only to close in 1969.

The original location of Angels Flight at 3rd and Hill before its 1969 closure (left) and the present day 3rd and Hill (right). (Photos via Wikipedia (L) and Google Maps (R))

Since reopening at the base of California Plaza in 1996, the railway has faced something of a rocky history. In 2001, one of the cars derailed and slid down the track—it resulted in the death of one man and the injuries of seven others. Angels Flight closed for nine years following the incident as its operators dealt with legal settlements and approval by the CPUC. The funicular reopened in 2010, only to derail again in 2013, this time to no injuries. Thursday's opening will mark the first return to public operations since then.

“People have worked very hard together to make sure it comes together and that safety is guaranteed,” Steven DeWitt of ACS Infrastructure told Downtown News.

Tickets for the funicular will be $1 (a doubling in price from 2013), and TAP Card holders will be able to purchase a ride for 50 cents. DeWitt told LAist that regular operating hours will be daily from 6:45 a.m. to 10 p.m.