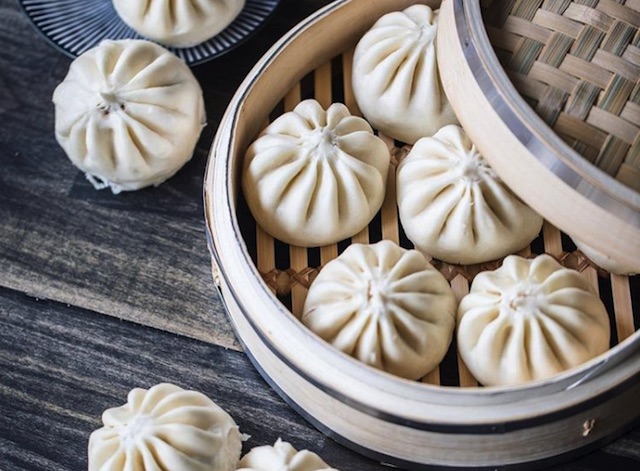 The bao at Wow Bao. (Courtesy of Wow Bao/Facebook)

It's not as if L.A. is suffering through a dire shortage of bao and dumpling joints. But Kang Kang closes at 11:00 p.m. sharp. And Luscious Dumplings shutters even earlier in the day. Ditto for Din Tai Fung locations. So what are you to do if you have a craving at the stroke of midnight, when you're dead smack in the middle of a Battlestar Galactica marathon?

The answer to that query is now Wow Bao; the Chicago-based restaurant opened its delivery-only kitchen in L.A. on Monday. The hours of service are fantastically late; delivery runs from 11:30 a.m. to 1 a.m., and will be available through UberEats, DoorDash, GrubHub, Caviar, Eat24, Postmates, Amazon Prime, and Topingo, according to Eater LA.

A look at the menu shows that the offerings take a fusion slant to Chinese fare. The sweet-tinted baos are packed with savory fillings that include Thai curry chicken, barbecue pork, teriyaki chicken, and whole wheat vegetable (which involves a hearty mashup of edamame, shiitake mushrooms, snow peas, broccoli, red bell peppers, and bok choy). Dessert-leaning fillings include chocolate and coconut custard. The potstickers and dumplings, however, are limited to either chicken or vegetables.

Wow Bao has drawn praise from our friends out at Chicagoist, who named the restaurant's food truck as one of the best in the city. Gourmet lauded the Thai curry chicken bao, which they describe as "fast food without that after-meal remorse." While we're highly skeptical that it will match the dizzying heights of Kang Kang's shen jian bao, there's no scoffing at the service's convenient delivery hours. Wow Bao will delivery to most parts of the city—you can check to see if they'll trek out to your address here.

According to Eater, Wow Bao's kitchen is located near USC. But, again, it's a delivery-only service.