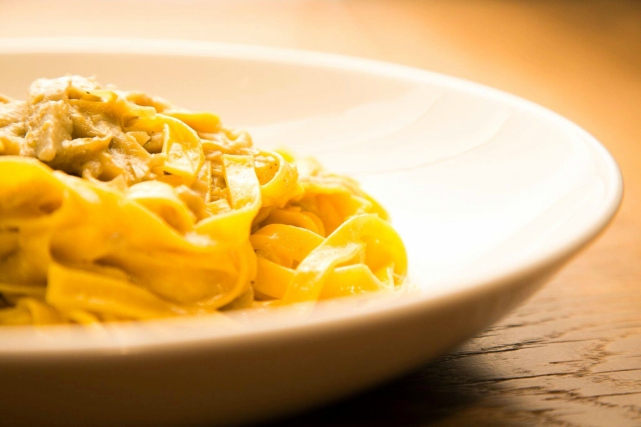 Rooting itself in Bologna's tradition of pasta making, Uovo ships its pasta nightly from the mother country. Why? Red yolked eggs. Widely unavailable in the states (it contains the blood of the chicken), the eggs are the secret of generations of sfogline (Italy's legendary female pasta makers). They're the reason why Lele and Carlo Massimini, along with Lowell Sharon, opened their kitchen in Bologna (from which the pasta is shipped).

The best flour is needed and can be acquired, but the special red-yolked eggs used in #Italy for #pasta that cannot be purchased in the US. Without these special eggs, it’s not possible to make the rich, deep yellow #noodle that tastes like none other.

The pastas are mainly tonnarelli (a handmade spaghetti noodle) and tagliatelle (a flat noodle), with sauces like Cacio e Pepe (pecorino cheese and black pepper), alle Vongole (clam sauce), and all’Amatriciana (tomato and pork cheek) made fresh to serve in Santa Monica. While the pastas are made in Italy, the sauces are prepared locally in Santa Monica.

Unlike fellow newcomers Rossoblu and Felix, Uovo aligns itself to the more casual end of the Italian restaurant spectrum (think Cosa Buona) with dishes topping out at $16. Seating lines a large bar, with a few tables in the front and back.

Uovo will have its official opening on Tuesday, with hours running daily from 11:30 a.m. to 10 p.m.