Some LAUSD Students May Not Be Allowed To View The Eclipse 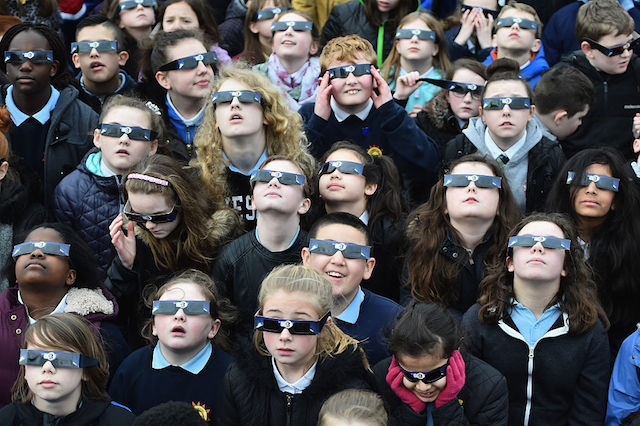 School children use special glasses to look into the sky at a partial solar eclipse on March 20, 2015 in Glasgow, Scotland. (Photo by Jeff J Mitchell/Getty Images)

For students throughout the Los Angeles Unified School District, Monday's partial solar eclipse is an event that has never happened before in their lifetimes (and won't happen again until 2024). Yet, a letter sent Thursday from LAUSD Superintendent Michelle King is recommending some students stay indoors for the eclipse.

"While a solar eclipse can be a phenomenal viewing experience, it can also cause permanent eye damage unless special eyewear is used," the letter reads. "We recommend that students who are not participating in an approved activity remain indoors from 9 a.m. to noon."

According to KPCC, schools throughout the school district have ordered NASA-approved eclipse glasses (specially polarized to prevent eye damage while staring directly at the sun), for the viewing. Yet, not all of the district's 514,000 students have been provided glasses. In addition, students must also have a signed waiver to participate in any eclipse viewing event.

"It's primarily a mechanism to let parents know that this is happening," David Holmquist, general counsel for LAUSD, told KPCC of the parental-approval waivers. "And we need them to be informed that their students either can or cannot participate in the events."

As the Los Angeles Times notes, a second letter from Superintendent King was sent out Friday, in response to criticisms over restricting students' viewing, recommending teachers build pinhole cameras as an alternate way for children to safely view the eclipse.

For those student remaining indoors during this rare cosmic event, LAUSD has linked to a live feed of the eclipse on its website (viewable here, by the way)—an option many of us adults staying in offices indoors for the eclipse will be using.

Related: What Time Will The Eclipse Peak Over Los Angeles?