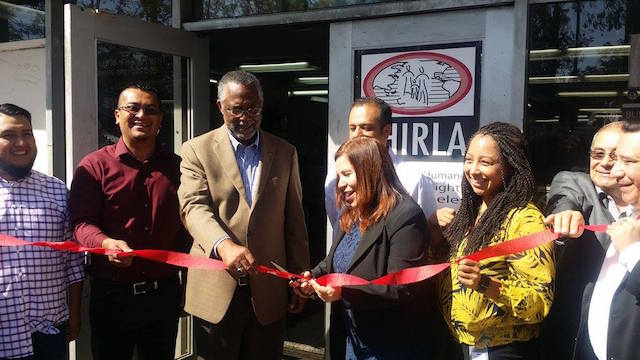 The Coalition for Humane Immigrant Rights of Los Angeles officially opened a new satellite office in South L.A., last week, a move that officials say is necessary given the anti-immigrant climate under the new White House administration.

“We’re going to fight tooth and nail when it comes to taking care of each other,” said Los Angeles City Councilman Curren Price at the ribbon cutting event held on Wednesday, August 19.

The new office is at 4301 S. Central Avenue, about three miles south of downtown. CHIRLA’s main office is near MacArthur Park.

Price, who represents District 9, in February announced he was pledging $1 million of his office’s discretionary funds to the Central American Resource Center, known as CARECEN, and CHIRLA, one of the largest immigrant-rights organizations in California. Each organization was awarded $500,000.

This funding, he said, allows the two organizations to expand legal services to District 9 through March 2018. The added services are necessary “to protect immigrants living in fear under the current Trump administration,” Price said.

“We will put our money where our mouth is to defend the rights of every Angeleno,” Price said Wednesday.

A recent study by the Pew Research Center found that the biggest unauthorized immigrant populations were in the New York and Los Angeles metro areas. About 1 million undocumented immigrants live in the L.A., Orange County, and Long Beach metro area.

Angelica Salas, executive director of CHIRLA, said the organization has already held 27 community outreach events, reaching more than 4,000 people in the South L.A. area. About 350 people have already entered the new office for services. People who go into the center will receive a legal consultation to determine which services are available for them, Salas added.

CHIRLA helps immigrants apply for citizenship and assists young immigrants with their applications for the Deferred Action for Childhood Arrivals, or DACA, a program that provides work permits and deportation relief. The organization also hosts Know-Your-Rights forums.

“This is only the beginning,” Salas said.

Alberto Retana, of the Community Coalition, said the office will serve as a beacon of hope where “African Americans and Latinos and immigrants … will be coming together to join forces.”

“The ‘American Dream’ belongs to all of us,” Retana said.

Related: How CHIRLA Is Educating L.A.'s Undocumented Community About Their Rights