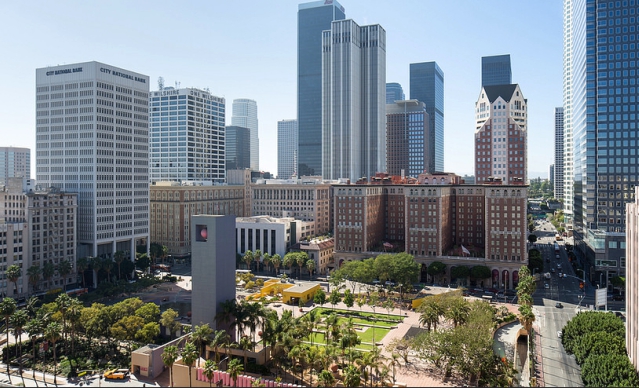 The American Civil Liberties Union and 12 other organizations are moving forward with a lawsuit against the City of Los Angeles for a ban on photography and the distribution of flyers at the Pershing Square summer concert series—restrictions the organizations have deemed unconstitutional. The Pershing Square Downtown Stage is a free concert series held at the public park from July 8 through August 27, and this year's line-up has included acts like The Wallflowers and the B-52s.

"At the request of the artist/performer, video, photo and audio devices are prohibited at Pershing Square’s Downtown Stage Saturday concerts," the concert series' website initially stated, notes a letter by the ACLU of Southern California that was addressed to the City of L.A. "This includes Pro cameras, monopods, tripods, selfie sticks, iPads or professional photography/video equipment of any type. This policy will be strictly enforced due to contractual agreement."

These restrictions were brought to the attention of the ACLU when Cliff Cheng, a photographer for the Los Angeles Collegian, Los Angeles City College's campus newspaper, attempted to secure press credential for the series, notes PetaPixel. When he was denied, he turned to the civil rights organization.

"Cheng asked the American Civil Liberties Union - Southern Calif., if it was Constitutional for the government to give up the free speech rights of its citizens and the news media to a private corporation?" a release by the photographer states, according to PetaPixel. "ACLU replied it was not Constitutional and wrote the enclosed letter to LA City asking it to comply with the Constitution."

"Because Pershing Square is a public forum, any restrictions on First Amendment activities there must be content-neutral, reasonable time, place, and manner restrictions," Eliasberg writes in the letter. "The existing policies providing for a total ban on photography/videography and an arbitrary permitting scheme for circulating pamphlets at the Downtown Stage Summer Concert Series are facially unconstitutional…"

The concert series' website has since been updated, with photography restrictions now limited to "[f]lash photography, professional camera or recording equipment (including cameras with detachable lenses and any form of camera stand) and laser pointers…" The ban on flyers still stands.

Rose Watson, a spokeswoman for the Department of Parks and Recreation, told the Los Angeles Times that the ban on professional photography remains because “[s]pace is so tight, bumper to bumper, wall to wall,” that photographers will have to make do without flash and with smaller cameras.

“If there are legitimate fears that the crowd is so large that it is dangerous, the appropriate response is to limit the overall crowd size, not ban photographers,” Mickey Osterreicher, general counsel for the ACLU, responded to the Times.

The suit is seeking a court injunction to end the bans.

"The City Attorney's office is currently is looking into the claims contained in the [ACLU's] letter and is working with the department on a prompt response," Frank T. Mateljan III, Deputy Director for the City's Attorney's Office, said in an email sent to LAist on August 8.