Patton Oswalt: 'What The F-CK Is Happening In Our Country'; Politicians & Celebs React To Trump's Speech 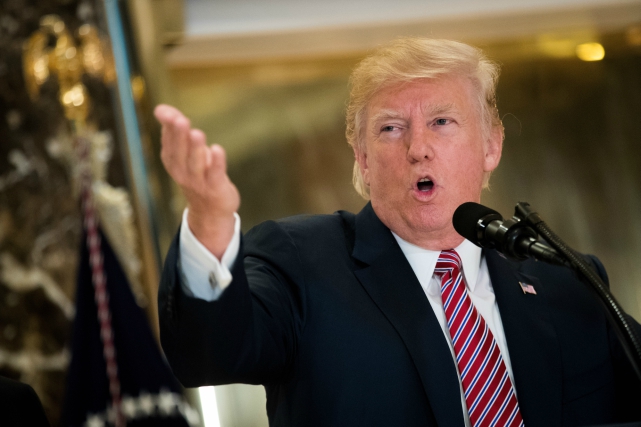 During a press conference on Tuesday at Trump Tower in Manhattan, President Donald Trump described the violence and chaos at a white supremacist rally in Charlottesville, Virginia, as a “horrible thing to watch.” He then added that counterprotestors and the "alt-left" were equally responsible for the day's events.

The press conference quickly drew reaction from politicians, journalists, actors, musicians, and others.

What...the...FUCK is happening in our country? Our president just...sided...with...Nazis and white nationalists. Holy. FUCK https://t.co/YJzAQBUJgp

Fuck this guy. He has such passion for all of the evil corrupt people on this planet. Never any rage at the murderers. No compassion. https://t.co/5OCUBFZdQx

Hate has always existed in America. Yes we know that but Donald Trump just made it fashionable again! Statues has nothing to do with us now!

Norman Lear, who created TV series like "All In The Family" and "The Jeffersons", tweeted:

Chelsea Handler called on past presidents to step forward:

Every past president that is still alive needs to come forward now and denounce Trump and advocate for him being declared unfit for office.

Barbra Streisand spelled out her case:

W/o a prepared statement, this Pres says what he really believes: Equating neo-Nazis to those protecting civil rights is disgraceful & crazy

The President of the United States just defended neo-Nazis and blamed those who condemn their racism and hate. This is sick.

Actor George Takei directed his comments to the president directly:

Donald, the only one praising your comments today is David Duke. That's how deeply damaged you are & how deeply you're damaging our country.

OMG. What did we just watch? He blamed the anti-racism protesters. He likened George Washington to Robert E. Lee. Donald. Trump. Fuck. You.

John Legend laughed at the president:

One of the most transparent lies Trump told today is that he likes to wait for the facts before he makes a statement. Hahahahahaahaha

Marco Rubio, the Florida Senator who ran against Donald Trump in the Republican presidential primaries, took to Twitter to state that blame for the violence at Saturday's rally lies squarely on "White Supremacists":

The organizers of events which inspired & led to #charlottesvilleterroristattack are 100% to blame for a number of reasons. 1/6

There has to be a polar opposite to everything. No matter how bad people get other people will only get better. Its miraculous. https://t.co/N6dAnoR73H

.@realDonaldTrump, you are embarrassing our country and the millions of Americans who fought and died to defeat Nazism.

I haven't seen anything that crazy since Tyson bit Holyfield @realDonaldTrump

As did actor Will Arnett:

The President of the United States is defending Nazis and white supremacists. On national television. We cannot forget this moment. https://t.co/oZAX0KRqR1

"Look there was violence on both sides" - Trump on WW2 probably

Speaker of the House Paul Ryan made his views clear:

We must be clear. White supremacy is repulsive. This bigotry is counter to all this country stands for. There can be no moral ambiguity.

Author and essayist Roxane Gay was blunt with her response:

Novelist J.K. Rowling made her own point:

One good thing about that abomination of a speech: it's now impossible for any Trump supporter to pretend they don't know what he is.

Captain America actor Chris Evans seemed to be in shock by the press conference:

Seriously. EVERYONE needs to watch that press conference in its entirety. He does everything flawlessly wrong. It's a stunning disaster.

Zoe Kazan, who co-stared in the Big Sick, personalized her message:

Am writing my relatives who voted for him to say that I need them to denounce our President now if they want to remain in my life.

And Kumail Nanjiani called out the president's supporters:

When it comes to love, kindness, acceptance and progress, I believe there is only one side.

And singer Lady Gaga posed her response as a question:

Do you think @realDonaldTrump @POTUS saying "both sides are to blame" in #Charlottesville makes him a racist supporter? Yes or no?