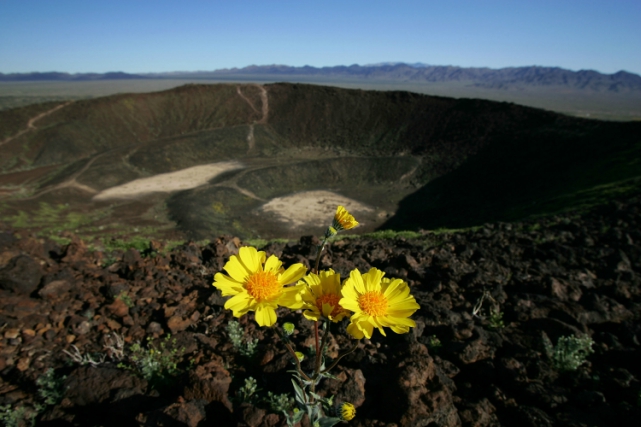 Two hikers at the Amboy Crater in the Mojave Desert were discovered dead on Saturday following a search by San Bernardino County authorities.

The search began just after 1:30 p.m. on Saturday when Kathie Barber, 58, called the San Bernardino County Sheriff's Department to report that she had lost her husband, Gen Miake, 60, reports the Los Angeles Times. The married couple is from Yorba Linda, and had been hiking the crater (an inactive cinder cone crater) since 11 a.m. Barber told authorities that her husband had a heart condition, and that she had run out of water.

Amboy Crater is located along Route 66 about half way between Barstow and Needles, and some 12 miles south of the Mojave National Preserve. Temperatures in Amboy were at 104 degrees on Saturday afternoon; however, heat reflecting from the crater's dried lava field typically increases air temperatures by several degrees, notes the San Bernardino Sun.

The Sun adds that, at 1:36 p.m., Sheriff's deputies deployed a patrol helicopter to search for the couple by air, and located the couple's car near the crater's trailhead. Barber and Miake were then discovered unresponsive “approximately 100 yards from one another in the open desert with no shade," a release by the Sheriff's department notes, according to the Sun. The couple was pronounced dead on the scene.