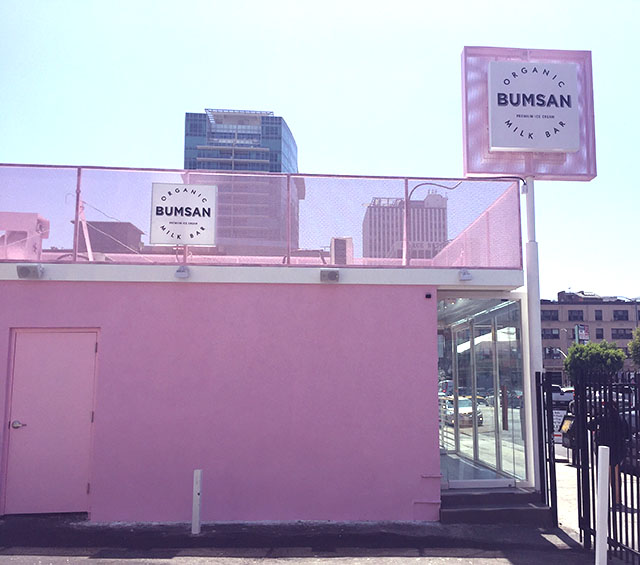 Koreatown is no stranger to amazing soft serve (see: Honeymee and Somi Somi), but the latest entry to the hot weather dessert crowd is more than just delicious frozen dairy: it's a millennial pink heaven.

Bumsan Organic Milk Bar opened on Western in early July and now stands as a bright pink oasis in the same parking lot as another Koreatown favorite, Beer Belly. Don't let the Instagrammable design fool you, though—the soft serve is legitimately delicious. The soft serve is made with milk from Bumsan Farm Co. (the largest organic dairy producer in Korea). It has locations across Korea and Japan, but the Koreatown shop is the first stateside location.

They serve only a few soft serve flavors: true milk, matcha, chocolate, and dragonfruit lychee (you can also get a swirl of the first two flavors or the last two flavors). You can then get it in a cup or a customizable cone, which feature various toppings around the top rim of the cone—everything from crushed oreos to rainbow sprinkles.

The prices aren't cheap, compared to a reasonably-priced cone from Magpie's, but the luxurious soft serve is worth the price. It's super smooth and not too sweet, but be careful because it melts rather quickly. Snap your photo and proceed to plow down into the cone.

The owner's wife's sister is Sunny from the popular Kpop group Girls' Generation, and she even made an appearance at the shop to celebrate the band's 10th anniversary.

🚨🚨It's not everyday that I come across someone's feed that looks like a dream with vibrant colors and dare I say, an aesthetic that I identify with? So when I found @emilyaeyoung 's it was a (candy colored) dream come true! She keeps it completely real and is so down to earth - what a breath of fresh air. 😍 Plus can you see how she makes a photo of a sign look so fab?? Gotta give this girl some love, everyone! 💕 • • • • • • • • • #palmbffs #huffposttaste #delish #foodiegram #forkyeah #icecream #foodiechats #foodporn #foodie #satisfeed #foodbeast #foodgasm #abc7eyewitness #vscovisuals #igfood #foodforfoodies #f52grams #vscofood #vscofoodie #zagat #foodilysm #deliciousfood #nomnom #foodgawker #spoonfeed #forkfeed #delishious #EEEEeats #darlingweekend #sgcafefood

Bumsan Organic Milk Bar is located at 534 S Western Avenue in Koreatown. Daily hours are 12 p.m. to 11 p.m., staying open until midnight on Fridays and Saturdays.