Is Drinking Something Hot Actually The Best Way To Cool Off? 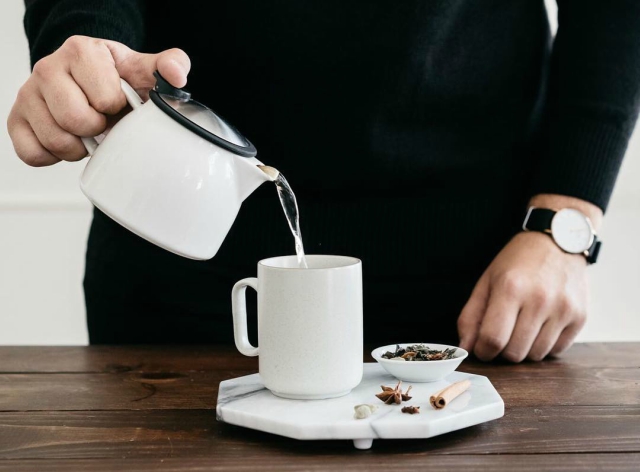 Photo via Art Of Tea/Instagram

Yes, it's nice to have a frozen treat on a hot day. Maybe even a chilled glass of iced tea. But do we have it backwards? Why is it that, in many tropical regions, hot tea is the cooling method of choice? "Trust me," Madhulika Sikka, executive producer of NPR's Morning Edition, told NPR. "I'm Indian, I'm British. A billion Indians can't be wrong. They drink hot tea in hot weather."

"Ice is very much an American invention," David Barenholtz of the American Tea Room told LAist. "A lot of these other places traditionally don't have ice. But, historically, even cold water you'd have to purify. So, you boil it. And what's a tasty way to drink boiled water? With tea."

Fair enough. But what does the science say about this counterintuitive concept? Does hot tea (or hot coffee) actually help cool you off on a hot day?

According to Ollie Jay, a sweat researcher at the University of Ottawa's School of Human Kinetics, the trick has to do with sweat, reports Smithsonian.

“If you drink a hot drink, it does result in a lower amount of heat stored inside your body, provided the additional sweat that’s produced when you drink the hot drink can evaporate,” Jay says. “It’s commonly thought that the hot drinks raise your core temperature, but we found that that isn’t the case. What we think is that it’s the thermosensors that line the throat and mouth that elicit the additional sweating response.”

Basically, that means the hot liquid doesn't actually raise your body's core temperature much, but rather, it tricks various oral receptors (the TRPV1 receptors, specifically) into thinking it's hot and kicking the body's cooling response into a higher gear.

"The hot drink somehow has an effect on your systemic cooling mechanisms, which exceeds its actual effect in terms of heating your body," Peter McNaughton, a neuroscientist at the University of Cambridge, told NPR.

So, do spicy foods, then, elicit the same reaction?

"The capsaicin [the actual chemical creating the spice] increases your body's metabolism," Dr. Zhaoping Li, director of the UCLA Center for Human Nutrition, told LAist. "Higher metabolism creates more heat [i.e. energy] in the body, which you then need to release. That's one way the body cools itself off. Spicy foods also make you sweat, which is very important."

But Li cautions that, for all the sweating we do on a hot day, hydration is very important. "And that doesn't mean just water," she adds. "Sweat is a salt-containing fluid. So, you should be drinking mineral water or Crystal Light, or something like soup."

As for ice-chilled water? "Studies show it's not an effective way to cool off," Dr. Li concludes. "And if you're looking to rehydrate and replenish minerals, room-temperature water is the best."