The Hollywood Reporter took a bold stance on Monday with a column titled "Why Network Presidents, More Than Ever, Have the Worst Job in TV" , which prompted a "lol, k" heard round the world from the people who fetch said presidents' lunches: Hollywood assistants.

Assistant work is a Station of the Cross for most aspiring entertainment-industry players, whether they toil on a busy set, at the desk of a fearsome producer or in an agency mailroom. Sure, there are perks, like free food and celebrity-spotting, but in many cases, the bad outweighs the good, and the "What in the actual f**k was I just asked to do?" outweighs both.

"Eventually, when they discovered Amazon Fresh and alcohol delivery services, they let me go. I was literally just a human Amazon Fresh."

An unofficial code of omertà generally disinclines assistants from dishing the dirt on their bosses (unless it's in the form of the obligatory tell-all), but we promised anonymity to a handful of current and former Hollywood assistants in exchange for their most sordid tales. All names have been changed, so that the assistants in question will be able to eat lunch in this town again. Here are the stories they told us, from the funny to the cringeworthy to the genuinely horrific:

Affairs Of The Heart
"My boss made me email his mistress with his lingerie preferences and then lie to his wife on where he was." —Katie, talent management assistant

"I had to call customer service for a former boss's sex toy and explain why it wasn't working." —Alex, talent management assistant

Lunch Duty
"My old boss would bring me the trash from his lunch so that I could throw it away for him. There were 3 garbage cans between his desk and mine." —Peter, showrunner's assistant

"My favorite personal story is the boss who yelled at me because Urth Caffe didn't toast his bread enough. —Maria, producer's assistant

"I had a boss swear that she was gluten-intolerant unless the bread was toasted." —A.J., talent management assistant

"I had a PA job that was basically buying everyone at the office alcohol and keeping it a secret from everyone else in the office. Everyone was always wondering where I was and thought I was doing a bad job because I was always out somewhere buying someone's secret liquor. Eventually, when they discovered Amazon Fresh and alcohol delivery services, they let me go. I was literally just a human Amazon Fresh." —Aiden, assistant on a reality series

"I once walked into my (FORMER) boss's office to ask him a question and came face to face with a crossbow, pointed directly at me." —Laurel, producer's assistant

"I worked at a big agency in the TV lit department for one of the partners. He walked in and told me that he needed help finding his Porsche. I thought that he’d parked it in the garage and needed help figuring out where he parked. Nope. He’d gone to run an errand (read: probably get in touch with his drug dealer) and LOST HIS PORSCHE somewhere in Beverly Hills. I asked if he’d used the key clicker to find it and he screamed for like five minutes about how I was supposed to have told him that his clicker would’ve helped him. Regardless, I had to drive my ass to BH and wander around for four hours trying to retrace his steps (sidebar: do you know how awkward it to walk up to random Porsche’s and inspect them to see if it’s your bosses car? YEAH. I almost got arrested two times. By the time I got back, there was no issue—why? He’d gone out and bought a new Porsche. I asked what he was going to do about the old one and he shrugged and went, “Eh. Leave it.” So, somewhere in the clean pressed, assistant-tear-lined streets of Beverly Hills, THERE IS A FREE PORSCHE." —Kyle, assistant to a TV lit agent at a talent agency.

General Weirdness
"My boss has us "tape up" her face." —Jackie, talent management assistant ["Taping" one's face is a D.I.Y. face-lift method that involves using elastics and tape to "look years younger instantly." See video below, if you must]

“I had to take a dog to the dermatologist.” —Lee, talent management assistant

"Once my boss gave me a Christmas card to mail out that said "Deck the Halls with Cows and Collies" and had a picture of cows and collies in Santa hats. She threw it at me and said "I don't understand it, explain it in black ink at the top." See photo below) —Nick, showrunner's assistant 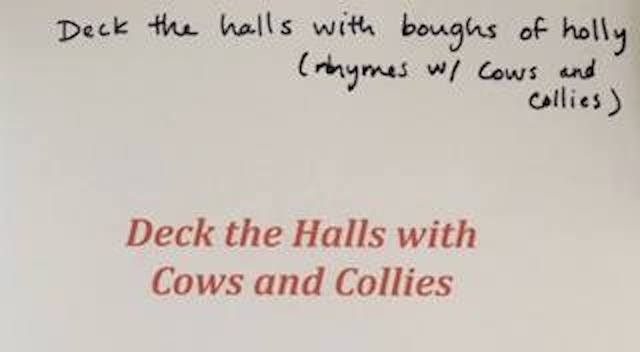 "I worked for an unhinged documentary filmmaker when I moved to LA. I had to testify at her child's custody hearing. She told me if she lost custody it would be my fault. That day I put in my two weeks' notice and told her I was going to grad school. I wasn't." —Kara, director's assistant

"My boss used to have two elderly, obese golden retrievers. One was blind and the other ate its own shit. Every day I'd have to drive to his house in the Hollywood Hills to pick them up, bring them to work, and then bring them back home at the end of the day...all because he didn't want to put them in his Tesla. Once, I also had to pick up his 90 year old father from a retirement home to take him to the dentist." —Matthew, assistant to an executive producer.

Travel Drama
"When a network president has to get on a plane right from work to chase down a passport their boss accidentally mailed to San Francisco the day before she's going on a business trip to Canada, then we can talk. Oh and when said boss makes arrangements for you to stay with her "friends" while in San Francisco who actually live in a nudist commune, yeah let's f**king talk." —Nia, network president’s assistant

"My boss was on a plane about to take off, and called me from her seat, ON THE PLANE, to tell me to call the airline because she had requested a window seat but was seated in the aisle. She was in first class with access to the flight attendants, but surely asking them would have been too easy." —Jen, casting assistant

Demoralization Of Character
"My first big industry interview was for an assistant position at [a major talent agency]. I was interviewing for an MP [motion picture] talent agent. In the interview he said, "You know, my wife really doesn't like it when I have female assistants. But looking at you, you'll be perfect!", insinuating that I was not attractive enough to threaten his wife. He said it with such confidence and excitement!" —Stella, talent management assistant

"So, horrible boss story: I had a cancer scare, and my boss said that if I was a truly good assistant I would've dealt with any emotional baggage earlier, so I wouldn't have cancer. She also wouldn't let me off work to go to the doctor, and I had to sneak around in order to find out if it was cancer or not." —Sam, talent management assistant

“I got laid off, and my former boss asked me to stand in line at 4 a.m. for the new iPhone on my last day of work.” —Genevieve, public relations assistant

Of course, no list of Hollywood assistant grievances is complete without a "Hamilton" reference. This one comes from Claire, who works at a major talent agency whose name we have expertly redacted in red:

All assistants were granted anonymity, lest they never be able to eat lunch in this town again.

If you are a Hollywood assistant being held in captivity against your will, feel free to email our tip line. We can help you would happily update this story with your dispatches.