This Is What Public Transit In L.A. Will Look Like For The 2028 Olympics 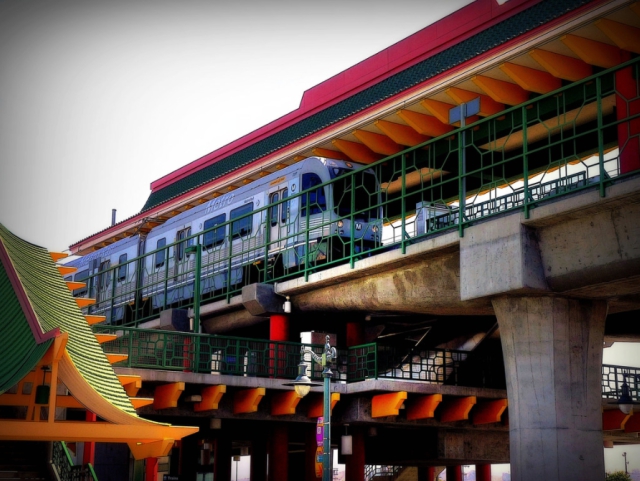 The International Olympic Committee announced on Monday that it has reached an agreement with the city of Los Angeles to host the 2028 Olympic Summer Games. And while the official vote will happen next month during the IOC's meeting in Lima, Peru, Metro has already taken the opportunity to post a map of what our city's transit system will look like for the games.

What will the Metro system look like when the 2028 Olympics and Paralympics roll into town? Hint: it will be bigger! https://t.co/VCbAWt3zDP pic.twitter.com/cXkGMiXd2P

With the passage of two county voter-approved measures (Measure R in 2008, and Measure M in 2016), Metro has been working on a series of projects to expand the city's mass transit system. As the map above shows, three major rail projects are currently in the works, and make up the bulk of the system's growth ahead of the 2028 games.

The Purple Line extension will bring the subway from its current terminus at Wilshire and Western, through Miracle Mile, Century City, and out to Westwood. The new terminus, at the Westwood VA hospital, is scheduled to open in 2024. The nine-mile, seven-station extension is set to cost $7.8 billion, and will usher future Olympic spectators to venues at UCLA including the Olympic Village and Pauley Pavilion.

The Crenshaw Line is an entirely new light rail line that will connect the Expo Line (at Expo and Crenshaw Boulevards) down to the Green Line (at its Aviation/LAX station). The 8.5-mile, $2.1 billion project is scheduled to open by the end of 2019, with an additional station connecting the line to the future LAX people mover (itself connecting through to LAX) set to open by the mid-2020s. The Crenshaw Line will have a stop near The Forum and the under-construction LA Stadium. The venues will host Olympic events including gymnastics, archery, and potentially half of the opening ceremonies.

The final major rail project Metro currently has under construction is the 1.9-mile Regional Connector, which will consolidate downtown L.A.'s underground rail network, connecting the Blue and Expo lines with the Gold line. The $1.8 billion project will add three new stations to downtown (at Bunker Hill, Historic Broadway, and Little Tokyo), and is scheduled to open by 2021.

While downtown likely won't be host to any venues during the 2028 games, it is a short distance from Exposition Park (where the opening and closing ceremonies, as well as several other events, are planned to be) and is on track to open thousands of more hotel rooms by the middle of the next decade. What's more, the area is already a cultural and entertainment hub for the city.

Beyond these major rail projects, Metro lays out a series of bus transit improvements that include a bus rapid transit line (or BRT) down Vermont Avenue (the second most trafficked route in the entire Metro system behind Wilshire); a high-capacity bus line connecting the Orange Line in North Hollywood, through Burbank and Glendale, to the Gold Line in Pasadena; and even a connector (bus or rail) between the Orange Line and the Sylmar/San Fernando Metrolink station.

"The bottom line," as Metro puts it, is that "with an expanding transit network and special bus shuttles, the 2028 Olympics and Paralympics will be pretty easy to enjoy without having to drive."

"Waiting until 2028 will provide a series of major public infrastructure projects in southern California with more time," Wall Street Journal noted in May. "Those include the renovation of Los Angeles International Airport and construction of new rail lines."

Part of the deal L.A. made with the IOC in return for a delay of hosting duties, is an over $1.7 billion investment from the committee to help with construction costs and other developments (like expanding youth sports leagues) ahead of the games.

“This deal was too good to pass up,” Mayor Eric Garcetti said, reports the L.A. Times.

Casey Wasserman, head of the LA2024 bid, echoed the sentiment in a tweet from Monday. "#LA2028 is an unprecedented opportunity. From every vantage point - sports, infrastructure, social programs, finance - it's a big win for LA."