The Story of P-22: The Famed L.A. Mountain Lion That Could

There’s a major traffic jam developing in an area of Los Angeles—yeah, nothing new—but the traffic we’re speaking of on this day is inside the Natural History Museum of Los Angeles, at its new “The Story of P-22: L.A.’s Most Famous Feline” exhibit.

There, at the ground-level entrance to the popular Nature Lab, a growing crowd of kids and adults are attempting (and mostly failing) to cross 10 lanes of busy L.A. freeway traffic without getting hit, at least virtually, in one of the interactive pieces featured. One of the kids, whose mom was trying to get his attention, shouts to her, “Hold on, Mom, I’m playing Frogger.” This particular piece projects video of rush hour traffic on the 5 Freeway onto the floor of the exhibit, to give visitors an impression of the harrowing journey that the young mountain lion P-22 took as he crossed two major freeways, the 405 and 101, to arrive where he now calls home, our beloved Griffith Park. 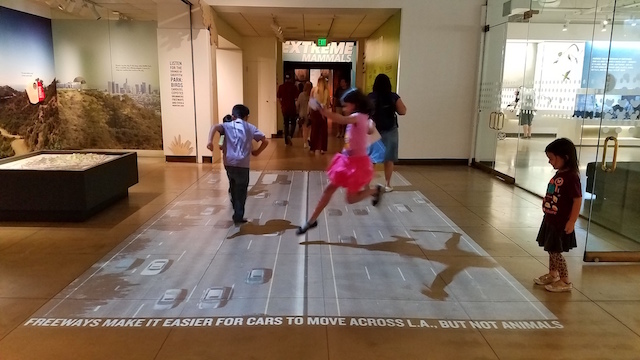 Kids "crossing the freeway" at the exhibit. (Photo by Teena Apeles)

This big, beautiful male cat first came to the public’s attention in early 2012 after pictures of him were caught by camera traps in the park placed by the wildlife biologist Miguel Ordeñana, who at the time was collecting footage as part of the Griffith Park Connectivity Study.

“The first image was of him walking along the trail that goes right above the Ford Amphitheatre,” Ordeñana said, describing an image captured on February 12, 2012, at 9:15 p.m.. “Nobody knows for sure [when P-22 first arrived], but it was likely a short amount time before that, because he was found right up against the 101 Freeway. He probably just entered the park, and right at that point there is also an overpass right below, so he likely crossed the overpass and just went right up along that ridge and was captured by our camera trap.”

Since Ordeñana shared those images, he and other wildlife advocates, including the National Park Service that put a GPS collar on P-22 that March and gave him his moniker (“P” for puma and “22” for the number cougar they had collared), have followed P-22’s adventures in—and sometimes out of—the park. 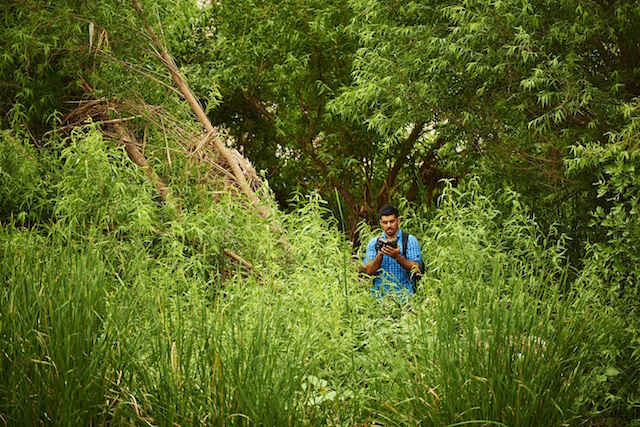 “The Story of P-22” addresses many of these events: from the bout of mange that almost took the mountain lion’s life and the iconic photographs of him by Steve Winter for National Geographic, to his brief but memorable stay in a Los Feliz mansion and his alleged encounter with a female koala named Killarney at the L.A. Zoo—all of which have continued to bring local and national attention to the challenges faced by mountain lions, and other urban wildlife, to survive.

The now seven-year-old P-22 has set himself apart from other mountain lions in many ways, and his journey to and life in Griffith Park is thoughtfully depicted through photographs, video, soundscapes, graphics, objects, and an especially awesome topographic map in what Ordeñana, curator of the exhibit and citizen science coordinator of Natural History Museum, calls a “small but mighty exhibit.” For one, P-22 survived crossing freeways while others have been killed (more than 13 mountain lions to date, including P-39 and two of her kittens, have perished on freeways and roads around L.A.), which is shown in an impressive wall-size map of Los Angeles County, with circular markers where known mountain lions currently live or have perished in recent years. You’ll also learn from the exhibit that P-22 has now gone at least five years without a mate (apparently the single life suits him) and, lastly, his territory, Griffith Park, is remarkably small for a mountain lion. The average male lion needs 200 square miles; P-22 has roughly nine. “He’s the first one to live in such a small territory,” says Ordeñana. “He has the smallest territory of any mountain lion ever studied. All of this information he’s providing us is really valuable.”

P-22 in 2014. (Video courtesy of the Natural History Museum of Los Angeles)

This and many other interesting stats and aspects of P-22’s life can be discovered when you visit, including immersive recordings from different spots in Griffith Park of sounds P-22 hears every day, camera trap footage of the cougar at different hours in the day, and video of a National Park Service team changing the battery on P-22’s collar, a replica of which also appears on display, as well as an actual camera trap. Watch him wander the park and “spray” his territory, as male cats do, and also see what he has in common with other Angelenos, such as bringing home “dinner” at night after a long day and being irritated by the sounds of circling helicopters—and, like other well-known residents in the city, dealing with the paparazzi.

Ordeñana continues to track P-22 to this day with camera traps in the park and often worries about him: “I definitely treasure every new photo and video I get,” he said. “I never know if it will be the last one. And I never know when he might attempt to leave. All the biologists still are shocked that he’s been here so long. Nobody knows what he’s going to do next.” 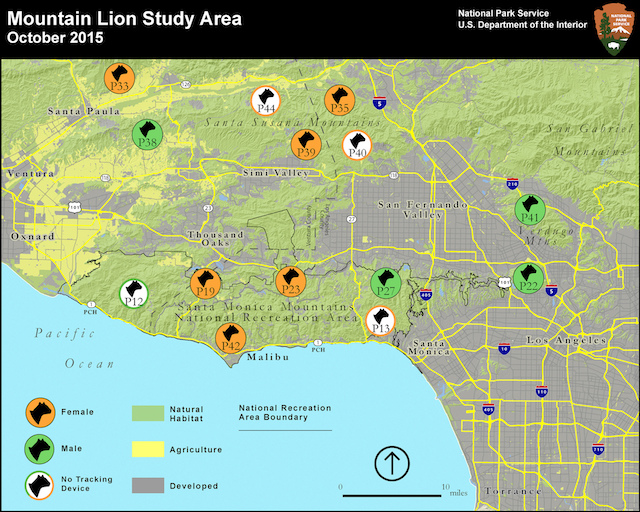 Teena Apeles is a Los Angeles-based writer, editor, and author. While working on a forthcoming book on P-22, she was happy to meet Miguel Ordeñana, who is one of the writers contributing to the project.