The Port Of L.A. Gets Its Own Metro Bike Share Program 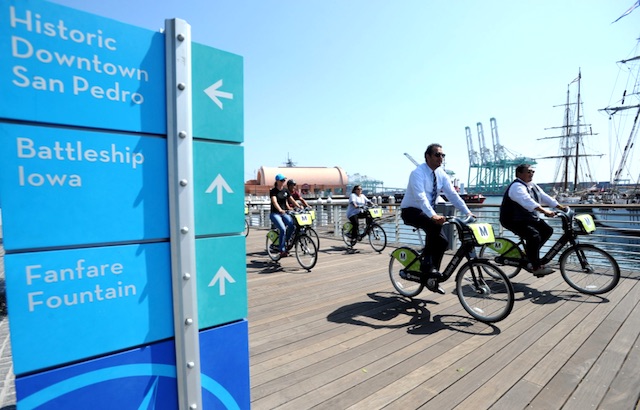 First ride at the Port Of L.A. (Photo courtesy of Metro/The Source)

Summer can be an idyllic time for biking around the city, which means that Metro's bike share program should be a popular option. Though, with the programs based in downtown L.A. and the Pasadena area, heat could be a serious deterrent for some. What about biking along the ocean as a sea breeze sweeps in to cool you down? This fantasy scenario is now a reality, as Metro launched its bike share program in the Port of Los Angeles on Monday.

The program includes 13 stations that stretch from Wilmington up north, to the Cabrillo Marine Aquarium down south. Here's a screenshot of Metro's interactive map of the brand new stations: 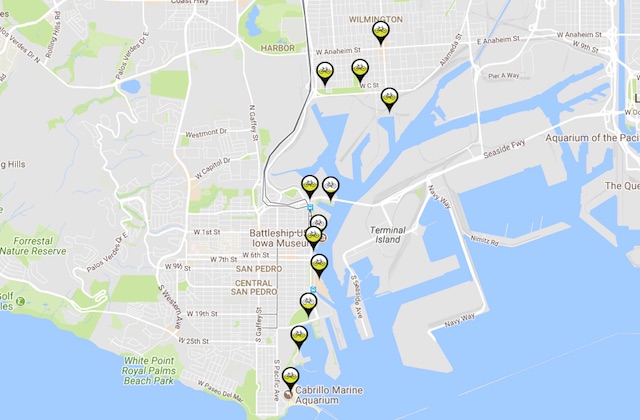 “The L.A. Waterfront is an ideal location for the Metro Bike Share program,” Gene Seroka, Executive Director of the Port of Los Angeles, said at Monday's unveiling, reports The Source. “Bike Share users will enjoy up-close waterfront access and can easily explore museums, an aquarium, a battleship, craft marketplace, expansive marinas and beaches as well as dining and shopping. It’s a lot of area to cover on foot, so we’re thrilled to offer another way for visitors to experience and enjoy our waterfront.”

If you're curious as to what, exactly, you can explore along the waterfront, The Source notes that the options are plenty. There's the Battleship IOWA, which is open to the public as a museum, as well as the Los Angeles Maritime Museum, which has a neat exhibit on San Pedro’s fishing and canning industries. Also, you can go through the Catalina Sea and Air Terminal to get to Catalina Island (and maybe catch a movie at an overlooked theater there).

If you're interested, you can purchase (with a credit card) a single 30-minute ride via one of the station kiosks for $3.50. You can also buy a monthly pass for $20 for unlimited 30-minute rides, or an Annual Flex Passes that costs $40 a year (with each ride being $1.75). If you're a first-time user, you can get a free monthly pass with the promo code RIDEPORTOFLA2017.

Another coastal bike share program is in the pipeline; one for Venice is expected to be unveiled later this summer.

To get you psyched about riding bikes at the Port of L.A., here's a video of County Supervisor and Metro board member Janice Hanh riding (somewhat shakily) through the ceremonial ribbon:

It's here! Metro Bike Share has launched at the Port of Los Angeles. 🚲🎉 pic.twitter.com/NI0jqGkLKS