O.J. Simpson Not Welcome At USC Football Practices And 'Functions' 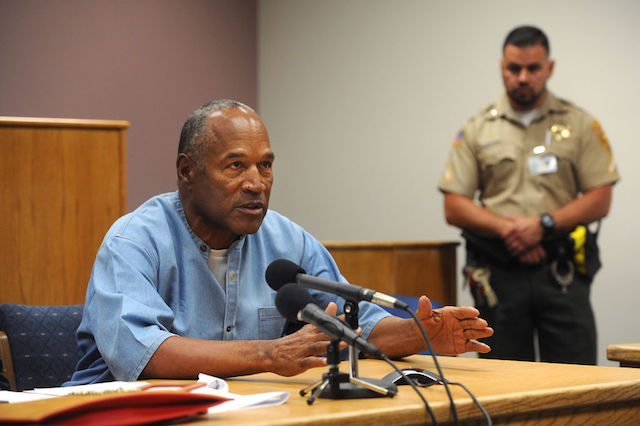 O.J. Simpson, who was convicted on kidnapping and armed robbery charges in 2008, was granted parole by a Nevada board on Thursday after serving nine years in prison. He may be released as early as October 1, 2017.

In wake of the news, several L.A. representatives have stepped out to distance themselves from the former L.A. resident and USC football star. Clay Helton, head coach of the Trojans, told reporters on Thursday that the Heisman Trophy-winning running back will not be welcomed by the team. "Right now with USC, what the administration and the athletic department have said is, no, O.J. will not be a part of our functions," said Helton, according to ESPN. "That's been the statement." CBS 2 added that he also won't be invited to watch the team practice. Helton said that he would be "cordial" to Simpson, however, if they met in person.

ESPN notes that, while USC has distanced itself from Simpson ever since he was found not guilty of the murder of Nicole Brown Simpson and Ron Goldman, Simpson's number 32 jersey is still displayed at the Memorial Coliseum during USC home games. Also, a copy of Simpson's 1968 Heisman Trophy is still up for view on campus. As noted at the Daily Trojan, USC's campus newspaper, the trophy is on display at Heritage Hall, alongside the trophies of former USC players Mike Garrett, Charles White, Marcus Allen, Carson Palmer, and Matt Leinart. "[Its] removal is long overdue," said the Daily Trojan in a 2016 column. "By continuing to display the trophy, USC is publicly endorsing its association with a convicted criminal whose collegiate playing days are nearly a half-century behind him."

Helton's comment came a day after Mayor Eric Garcetti told Buzzfeed that Simpson will "probably go to Florida or something." When asked about Simpson's 1994 murder trial (Garcetti's father, former L.A. County District Attorney Gil Garcetti, oversaw the prosecution for the infamous trial), Eric said that Simpson would likely face a chilly reception if he were to return to Los Angeles. "Is he welcome in Los Angeles?" Garcetti asked. "I don't think most Angelenos would welcome him. I don't think a lot of communities would welcome him."