Lyft Previews 'Taco Mode', Which Adds A Taco Bell Drive-Thru To Your Route 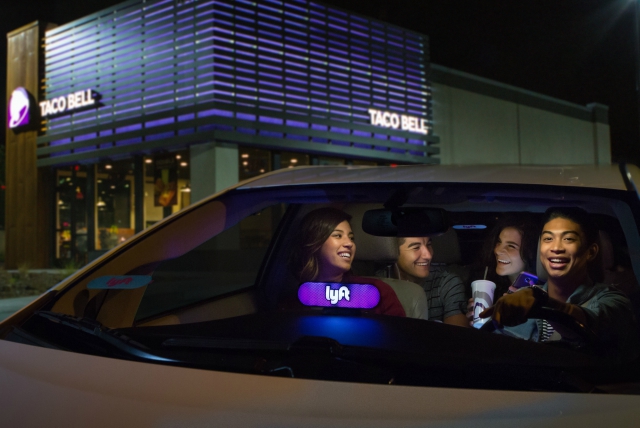 Night owls of Orange County will soon be treated to a pairing of two nocturnal essentials: Lyft and Taco Bell.

From July 27 to July 29 (and again from August 3 to August 5), riders in Orange County (specifically those within a certain radius of the Newport Beach Taco Bell at 1400 West Coast Highway) will be able to activate "Taco Mode" in their Lyft app (specifically between the hours of 9 p.m. and 2 a.m.). Taco Mode will reroute your journey, taking you through the Newport Beach Taco Bell before dropping you off at your final destination.

"We realized that for every person who has asked their Lyft driver to make a pit-stop at Taco Bell - and we've seen many - there are likely those who weren't sure if this was possible," Marisa Thalberg, Chief Marketing Officer of Taco Bell, said in a statement. "With the advent of this fantastic partnership with Lyft, we will erase any lingering uncertainty and celebrate the ability to ‘ride-thru’ in Taco Mode."

“We will allow drivers to opt in to that so we can make sure we understand their full experience, and the customers can get the full delight of opting into ‘Taco Mode,’” Melissa Waters, head of marketing for Lyft, told the New York Times. “Then we can fully understand how everything works before we roll out more broadly in Southern California, then more broadly nationally.”

Taco Mode is in a testing phase right now, which is why it'll only be available at the Newport Beach Taco Bell, but an emailed release from the two companies notes that the option should roll out nationally by 2018.

While Lyft remains number two in the ride-sharing market (behind the behemoth Uber), Bloomberg notes that the company has been seeing stronger growth recently. Revenue for the company increased 25%—higher than Uber's— surpassing $1 billion during the second quarter of 2017. Meanwhile, rival Uber has been experiencing a series of self-inflicted wounds culminating in the resignation of CEO and Founder Travis Kalanick late last month.