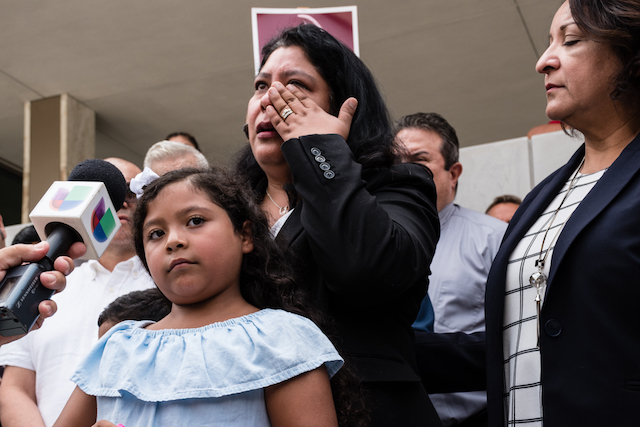 Victoria Carias and her daughter at a press conference on Monday, shortly after Pastor Noe Carias was detained by immigration officials. (Photo by Julia Wick/LAist)

Noe Carias is the lead pastor at an Evangelical church near Echo Park, a position he has held for a number of years. He is originally from Guatemala and has been in the United States since he was 14 or 15, according to his wife. Carias was reportedly detained during a court appearance Monday during which he had been hoping to receive a stay of removal. His deportation order reportedly dates back to 1994 or 1995, according to advocates for the family. He previously received a stay of removal in 2014, and that same stay was extended in 2016. 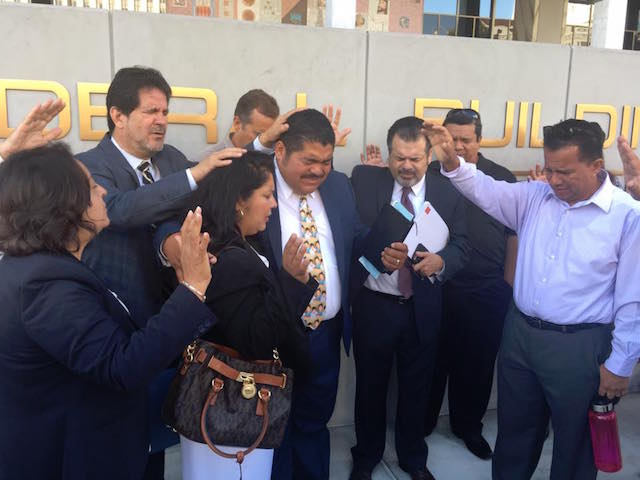 Clergy and community members pray over Pastor Noe Carias and Victoria Carias outside the Federal Building before the pastor's appointment with immigration officials on Monday morning.

"He has a U.S. citizen wife and he has two little children," pastor and community organizer Martin Garcia told LAist. "They own a house, and at this moment the whole family is going to crumble because he was the economic support for the family. It's going to have an impact."

"We consider this unfair according to the promises of the administration," Garcia continued. "They said that they were only deporting people who had major crimes—bad hombres—but not really people without any criminal record."

"My husband is not a criminal," Carias' wife, Victoria Carias, told LAist outside of the Federal Building while her two small children played nearby. "He's been a good citizen." Advocates for the family say that Pastor Carias does not have a criminal record. 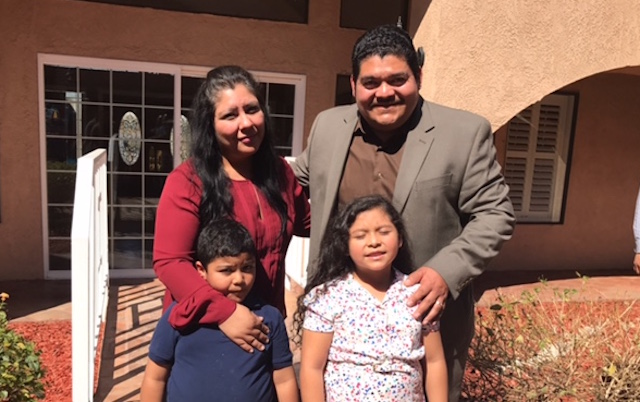 Pastor Noe Carias, his wife Victoria, and their children, Nylah, 7, and Abraham, 5. (Photo courtesy of the family)

"The only thing he's done wrong is come here," his wife said. "We've tried to fix it for a long time, but there hasn't been any kind of reform," she continued, explaining how current immigration laws would require her husband to leave the country for 10 years in order to obtain legal status. "I need my husband," she said, explaining how it wouldn't have been feasible for him to leave their two young children for 10 years. The couple's children Nylah and Abraham are 7 and 5, respectively.

Victoria Carias, who was born in the U.S., told LAist that she met her husband at a Los Angeles church when he was 17 and she was 15. They are celebrating their 14th wedding anniversary on Wednesday.

We reached out to Immigrations and Customs Enforcement for more information about Carias' case and will update the story when we hear back.