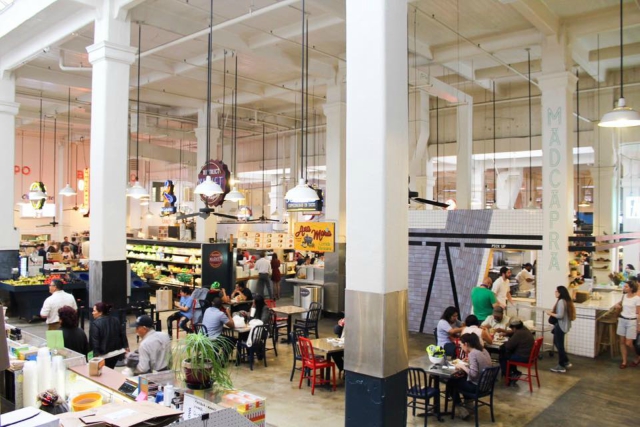 For the generation of people who think "adulting" is a word and seek out coloring books for grown-up anxieties, boy have we got exciting news for you: the creator of Umami Burger is opening a PB&J sandwich stand at Grand Central Market. The L.A. Times reports that Adam Fleischman, known for bringing in the franchise of brioche buns to L.A. back in 2009, is planning to open PBJ.LA. He'll be focusing on his own version of the PB&J, which looks very similar to Smucker's Uncrustables. Or, in the words of the L.A. Times, it's "an enclosed disk that looks remarkably like something from Area 51."

The bread comes from a local baker whom Fleischman will not disclose, and he seals the circular sandwiches with a specialty machine. The stand will sit in between DTLA Cheese and Chiles Secos in the market, and Fleischman intends to wrap the sandwiches (or whatever we should call them) in paper, going for a "branded delivery mechanism." The ingredients within the secret bread will encompass stone fruit and rosé, cashew butter, mango chutney, and other house-made nut butters and jams. He explains how “[e]veryone has their memory of what it is; I think we’ve been able to elevate it and gourmet-ify it." The L.A. Times describes this as his "Marcel Proust moment via Don Draper"; here at LAist, we'd describe it more as a Tom Haverford Entertainment 720 moment.

Eater points out that Fleischman recently closed his Ramen Roll restaurant in Culver City, so let's hope these UFO uncrustables last longer. He's also working his way into coffee with the Cold Cocked Coffee Co. in Koreatown. “We’re trying to create disruptive products,” he told the L.A. Times, so we can only wonder what's next.

The stand plans to start serving in August.