Sorry, But Another Food Hall Is Not Opening Up Next Door To Grand Central Market 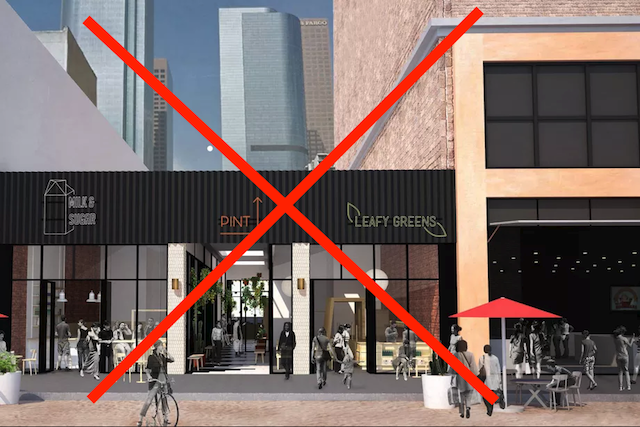 Sorry, but there are no (real) plans to open another food hall next door to Grand Central Market, despite what you may have read.

It appears the confusion began sometime in September when real estate brokerage firm RKF released a rendering for its 327 South Broadway listing (adjacent to Grand Central Market). The rendering shows the property renovated into a food hall/food court (as evidenced by the rendered signage and interior view). From there, buzz began to grow that the property was, in fact, being redeveloped into a food hall.

LAist reached out to both Neilson Hammer (the firm which handles the property), and RKF (the brokers) to verify the forthcoming food hall, but were told that no such plans existed.

"We haven't decided what we're doing with [327 S. Broadway]," Bob Baravarian of Neilson Hammer told LAist. "RKF is representing us and is marketing it to different opportunities, but we haven't signed anything yet. We don't know if it's going to be a single shop or multiple retailers. We don't have any plans for anything yet, so I don't know where that comes from."

"We're not necessarily tied to anything specific," Kristin McCann, one of the RKF representatives listed on the property, told LAist. She added that the space will certainly not be a food hall, as "food stalls are too small for the [leasing] footprints." The smallest of the three spaces for lease at the property is 2,437-square-feet. She continued that a restaurant could take the space, but that a clothing store or anything else could just as easily. "Yeah, we're open to anything."

Well, there you have it. The supremacy of Grand Central Market along South Broadway will remain untouched for now. However, food halls are popping up seemingly everywhere else in the city, with one definitively coming soon to Spring Street.