This L.A. Bakery Put Ube Ice Cream In Their Doughnuts

B Sweet Dessert Bar opened on Sawtelle in 2014 after a few years as a catering company and roving truck, finally bringing its decadent bread pudding and ube-flavored cakes and ice creams to the masses. In the heat of summer, though, "steaming hot" bread pudding is a slightly hard sell. In comes B Sweet's other iconic dessert: the "halo."

The halo is B Sweet's ice cream-filled doughnut dessert. They aren't the first ones to invent such a concept, but the halo at B Sweet has a special history. Sweet B's Barb Batiste, is a Filipina chef whose father passed away five years ago. He and Barb had a very special relationship; there's a chair marked for him in the restaurant, and Barb has fond memories of getting Thrifty's ice cream with him every other day as a child. His name was Angel, and after he died, Barb decided to honor him by combining his two favorite desserts: doughnuts and ice cream. The circle reminded Barb of a halo hanging above Angel's head after his passing; hence, the halo dessert was born.

Once the dessert took off, they got their local doughnut shop to take Barb's recipe and make larger quantities for them every morning. Once delivered, guests pick their choice of ice cream, the doughnuts are filled, and it gets put into a custom press that heats up the dessert and seals the edges. They're served directly off the press, creating the perfect mixture of gooey warmth and frozen dessert.

Here's how it's done:

(GIF by Julia Wick/LAist, Photos courtesy of B Sweet)

The ice cream in the middle is the most unique part of B Sweet. Besides offering a variety of Thrifty flavors in honor of Barb's late father, the dessert shop has many Filipino flavors to represent their heritage. The most popular is the ube, which has a bright purple color. It's a purple yam popular in the Philippines, and it has a hard-to-define flavor (some people compare it to coconut, which Barb disputes). Before the halo dessert came along, B Sweet offered it as regular ice cream, and soon found out they would need to teach customers how to pronounce it and give them tasters to introduce the flavor. The ube and other filipino-flavored ice cream is Magnolia Ice Cream, which Barb describes as the Haagen Dazs of the Philippines. The halo itself also recalls the popular Filipino street food of pandesal (a sweet bread roll) filled with ube ice cream. 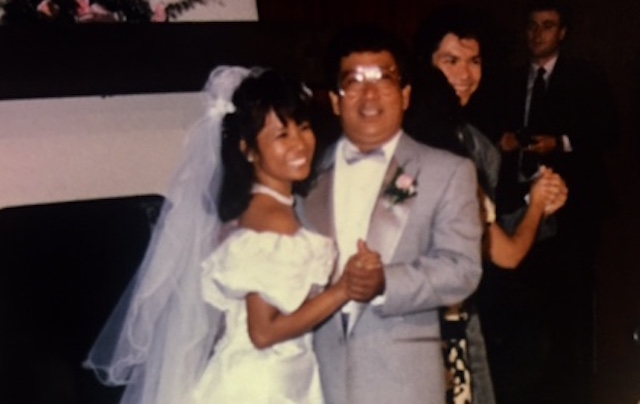 Barb and her father Angel on her wedding day. (Photo courtesy of B Sweet)

The bakery uses ube in lots of desserts, as well as a flavor based off the coconut-based Filipino dessert buko pandan, which has a bright green color from the pandan leaves. As a result, the sweet treats create a fantastically bright rainbow of decadent desserts. With so much amazing Filipino food in Los Angeles, it only makes sense to be the home for such a playful and fantastic Filipino bakery.