L.A. 7-Elevens Now Stocking Soylent Because We Live In A Post-Lapsarian Dystopia 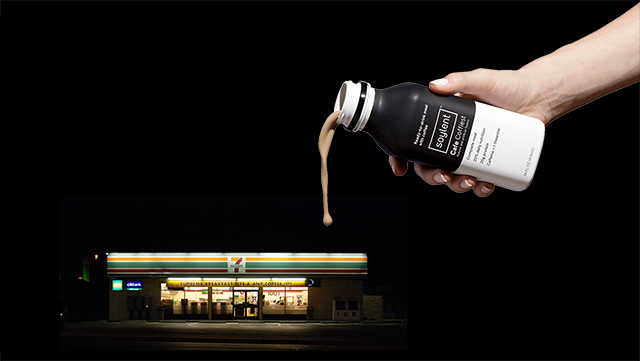 Soylent, the all-in-one nutritional beverage heralded as the "end of food," will be available for sale at 18 different L.A.-area 7-Eleven stores starting Monday. The Great Los Angeles 7-Eleven Experiment of 2017 marks the food disrupter's first foray into the retail market: up until now, Soylent products have been available exclusively on Amazon and the company's own website.

Soylent's ready-to-drink meals are designed to maximize efficiency, providing "all the vitamins, minerals, fats, carbohydrates and protein that the body needs," presumably so you have more time to disrupt other industries at your start-up. The Los Angeles-based company takes its name from Soylent Green, a 1973 science fiction film where a futuristic new food designed to feed a ruined Earth is actually made of [spoiler alert] people.

"It is exciting that the demand for our breakthrough line of drinkable meals has moved beyond e-commerce," Rob Rhinehart, Soylent Founder and CEO, said in a press release for the Soylent x 7-Eleven collab.

“Imagine the amazing good fortune of the generation that gets to see the end of the world. This is as marvelous as being there in the beginning," added Jean Baudrillard, not in a press release for the Soylent x 7-Eleven collab.

Products will be available at the following 7-Eleven locations in the Greater Los Angeles Area, subject to change:

The 7-Eleven locations will carry three Soylent flavors including Cacao, Cafe Coffiest and the new Cafe Chai. We are still waiting to hear back on retail prices.

Update [11:45 a.m.]: Due to some confusion, we would like to clarify that Jean Baudrillard's simalcrum departed this earthly world in 2007, and he was not literally talking about Soylent's expansion into the retail market when he wrote about the amazing good fortune of the generation that gets to see the end of the world. That quotation comes from Fragments: Cool Memories III, 1990-1995 and not the Soylent press release.