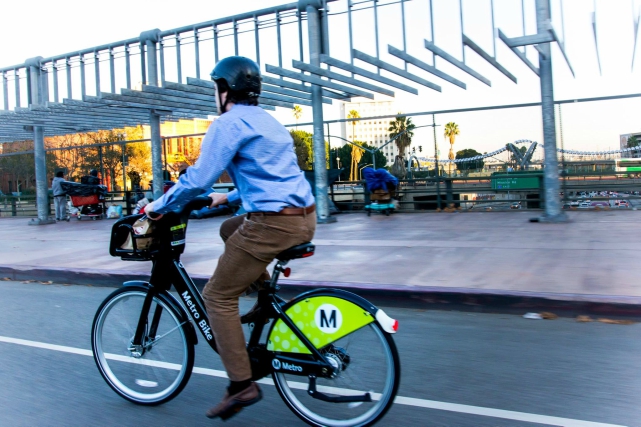 Metro's Bike Share program is celebrating its first anniversary. The program's pilot launched in downtown L.A. last July and has achieved its goal of one ride per bike per day. "We're gratified by the results in our downtown pilot," Dave Sotero, spokesman for Metro, told LAist.

The program currently has 61 stations throughout the downtown loop, reaching as far north as Chinatown, and as far west as Good Samaritan Hospital. Nearly 6,000 passes have been sold for the bike program (an individual's monthly pass is $20), and 182,482 trips we logged (covering 452,840 miles), according to data released for the anniversary.

"We're expanding to different parts of the county," Sotero continued. Bike share stations are already being installed around the Old Town Pasadena area, and bikes will be available beginning July 14. "We'll have a station at the Rose Bowl, CalTech, all the major destinations in the Old Town area," Sotero said.

So, can you rent a bike in downtown Los Angeles and return it in Pasadena? "It's conceivable," Sotero told LAist, "but the bike share is intended for short-distance trips in a distinct urban area." He adds that you can make a day out of riding a bike around downtown, returning that bike, jumping on the Gold Line, and renting another bike in Pasadena. Sounds like a plan to us!

Metro will debut more bike share stations in the Port of Los Angeles on July 31, and in Venice later this summer. The City of Santa Monica launched its own bike share program (separate from Metro's) in late 2015, and now has over 75 stations throughout the city, with four others in Venice. Beverly Hills and West Hollywood have also launched their own bike share programs recently.

And if you're curious what sort of environmental impact the Metro's bike share program has had in its first year, some 430,198 pounds (215 tons) of carbon emissions have been reduced—the equivalent of taking nearly 46 cars off the road.