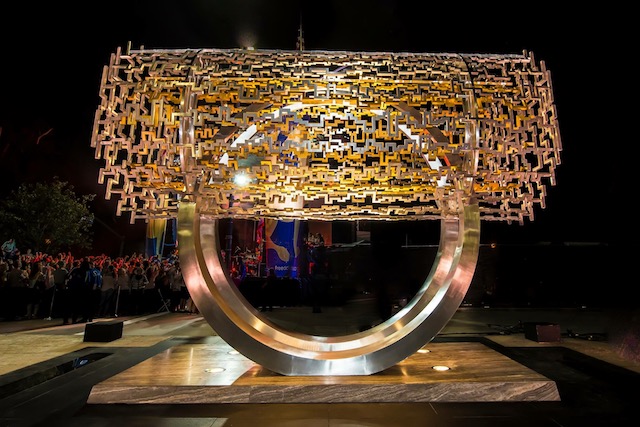 (Photo courtesy of the Farhang Foundation.)

Los Angeles celebrated the diversity of America this July 4th with the unveiling of the Freedom Sculpture, a brand-new work of public art in Century City. The Freedom Sculpture is a gift from the Farhang Foundation, an Iranian-American culture and arts nonprofit, and Mayor Eric Garcetti was among those on hand to celebrate its unveiling at the inaugural L.A. Freedom Festival on Tuesday.

"The Freedom Sculpture is a testament to the values we hold dear and we are honored to receive it," Garcetti said at the festival, which drew over 70,000 people to the sculpture's location on a bus stop median off Santa Monica Boulevard, a spokesperson for the Farhang Foundation told LAist.

Over one million people donated about $2.5 million to the Freedom Sculpture's crowdfunding campaign, with L.A. luminaries such as Elon Musk and Lynda Resnick lending support to the sculpture. The two vast, stainless-steel concentric cylinders that make up the Freedom Sculpture were designed by renowned architect Cecil Balmond, who drew inspiration from the Cyrus Cylinder, a 2,500-year-old Persian artifact often referred to as "the first charter of human rights."

"The Freedom Sculpture, is a 'Statue of Liberty' for the West Coast — It is an Iranian-American led, widely crowd-supported public monumental gift," according to the official website of the sculpture.

The sculpture's unveiling comes at a time of increasing unrest for L.A.'s Iranian community, many of whose members feel targeted by President Trump's revised travel ban, the LA Times reports. Iran is on the revised list of six Muslim-majority countries that will be affected by the ban; the Farhang Foundation's erection of a monument dedicated to diversity, in the heart of one of the most diverse cities in America, may be seen as a testament to the city's commitment to inclusion.

The Freedom Sculpture is at 10000 California Route 2, Los Angeles.