A Guide to Home-Style Filipino Food in L.A.

Many of us have been waiting patiently for Filipino cuisine to start making headlines in mainstream media. Filipinos, after all, are the second-largest Asian American group in the country, according to the 2010 census, so it’s about time that lumpia (deep-fried egg rolls) and adobo (meat cooked in soy sauce, vinegar, bay leaves, black peppercorns, and garlic) became part of everyone’s vocabulary. And it’s finally happening: from longanisa (sausage) bowls and sisig (pig’s head and liver) tacos to ube (taro) milkshakes, Filipino-inspired items are popping up on menus at restaurants and food trucks in major metropolitan areas across the country. As satisfying as it is to see Filipino-American chefs taking our flavors to the masses with fusion dishes, it’s those traditional recipes that really warm your heart. Here in Los Angeles County—home to the largest population of Filipino Americans in the country—there is no shortage of eateries to find this taste of home.

Traditional Filipino food can best be described as sweet, salty, saucy, or all of the above, at once. There are many fatty dishes in the mix (we heart lechon, or roasted pig), but it's definitely comforting, as practically everything is served warm, whether it’s boiled, steamed, or fried to a crisp. And there’s a lot of meat, chicken, and fish involved, often using parts of animals most Westerners shied away from (oxtail, for example) until “daring” chefs made offal hip. (Balut still not included.) 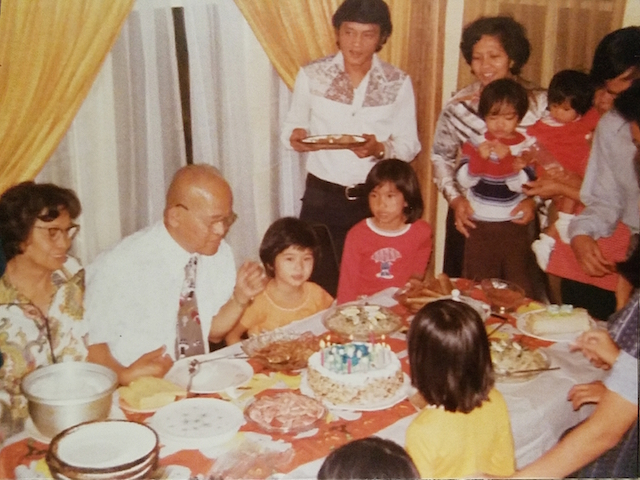 The author's family in 1977. The cakes in the photo were from Betsy's bakery, which used to be next to LACC. (Photo courtesy of Teena Apeles)

As early as the 1920s, Filipinos arrived in Los Angeles, mostly single men who worked in agriculture. The population grew over the decades, especially after World War II, as Filipino men who served in the U.S. Army were granted U.S. citizenship and able to immigrate fairly easily. My lolo (“grandfather”) was one of those servicemen. His family and my parents’ barkada (friends) arrived in Los Angeles in the late ’60s and early ’70s, choosing the city for its warm climate. Most of them first lived in Silver Lake, Los Feliz, and East Hollywood, close to bus stops.

“Back then, the only Pilipino grocery was located on Temple Street near Benton Way, called Lorenzana,” shares one tita (aunt), near where the much-beloved, family-owned Bahay Kubo restaurant is today. “The only [Filipino] restaurant was Travelers Restaurant or Cafe.” Reviews of that restaurant by my relatives are mixed: from “we enjoyed it” to a “hole in the wall” that “wasn’t that great.” One tito (uncle) believes the family of Los Angeles Rams quarterback Roman Gabriel, whose father was Filipino, may have owned it, as his photos were all over the walls. 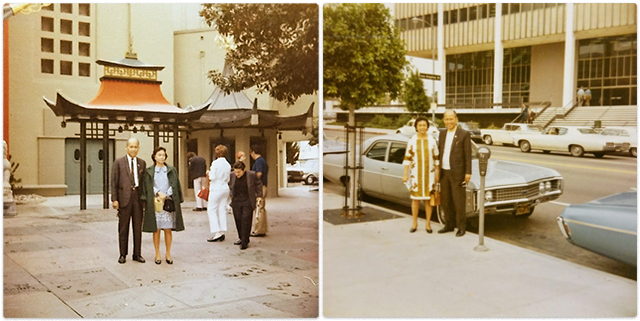 
Lorenzana later opened a bigger market on Vermont Avenue, and bakeshops and more restaurants followed as more Filipinos moved to the area. A favorite stop for fresh pan de sal (bread) and cake rolls was Betsy’s bakery next to Los Angeles City College on the corner of Vermont and Willow Brook, now home to the bustling Seafood Ranch Market and Mga Lutong Bahay, the Filipino grocery and restaurant chain, with an impressive selection of authentic dishes and a pretty swanky, modern second-level seating area with, of course, the mandatory big flat-screen TVs airing Filipino TV programs. It is joined by numerous Filipino mom-and-pop and other chain eateries, bakeshops, and markets on or near the three-mile section of Vermont Avenue from Hollywood Boulevard down to Wilshire Boulevard. Although Eagle Rock or the Echo Park-adjacent Historic Filipinotown might be more readily associated with the cuisine, this stretch of Vermont constitutes a kind of unofficial Filipino food corridor where—on last count—there were at least 15 Filipino establishments to be found.

At the northernmost end, there’s Oi Fusion on Hollywood Boulevard with a solid selection of chicken, beef, and seafood bowls, catering to younger generations. Down south on Wilshire, there’s Neri’s, which has been serving traditional Filipino dishes for more than three decades. And in between, there are the cafeteria-style restaurants like Pampanga’s Grill and our family’s longtime favorite caterer, Little Ongpin, on Sunset Boulevard; the bakeries Leelin and Red Ribbon; and markets Tambuli Seafood Market, Seafood City, and Island Pacific, which has two locations along Vermont that also serve hot food. 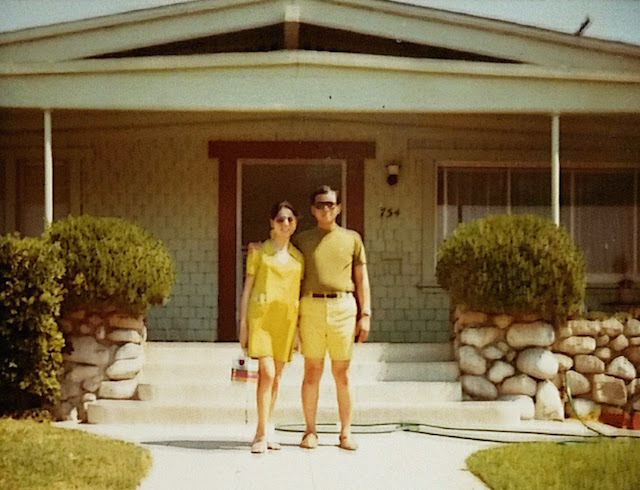 The author's parents in 1971. (Photo courtesy of Teena Apeles)


With so many options, where should you go for authentic Filipino food? It depends on the occasion. For takeout, do as my parents do and stop at a minimum of three different restaurants to pick up family dinner en route from their business in Culver City to the family home in East Hollywood. Here's how they do it, and what they get where.

First stop is DJ Bibingkahan, with a tasty selection of lechon skins, fried pork and chicken that you dip in vinegar and eat with rice. They also have my dad’s favorite dish, ampalaya (bitter melon, a green tropical fruit that is sautéed with vegetables and often served with meat). Note: None of us can stomach it except him. 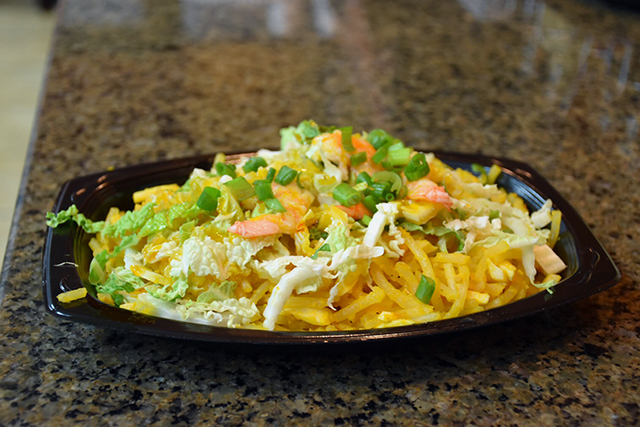 Next, they’ll try to stop at Manila Sunset—parking is pretty scarce at this busy corner strip mall on Vermont before Santa Monica, so send someone in and keep the engine running. Here, pick up pancit Malabon (a thick rice noodle dish served with different veggies and named for the city where the dish originates from), crushed chicharon (fried pork rinds), slices of hardboiled eggs and lemon, and seafood in a thick, orange, peanut sauce. Also try their daing na bangus (marinated fried milkfish) with tomatoes. 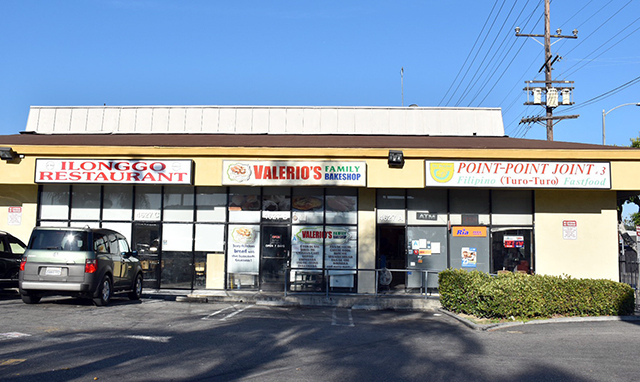 My parents also stop at Point-Point Joint on Santa Monica, for my mom’s favorite stew, dinuguan, aka “chocolate meat,” that uses various pig parts—“the bloodiest parts,” she says—and is cooked in pig’s blood. If they’re out, they’ll go to Ilonggo Restaurant two storefronts down to see what’s available, and pick up some BBQ chicken or pork skewers, and grab turon (deep-fried banana fritters) at Valerio’s Family Bakeshop sandwiched between the two fast-food joints.

Point-Point Joint, Valerio’s, and Ilonggo are located at 4627 Santa Monica Boulevard (back of the strip mall) in East Hollywood. 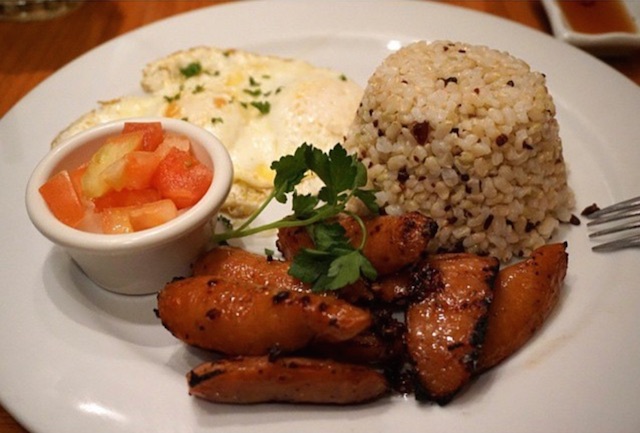 
For a date night or brunch with your barkada, a pleasant sit-down meal can be had at L.A. Rose Cafe on Fountain Ave., owned by the charismatic “Lem” Balagot since 1982. With its Parisian café-like ambiance, ceilings draped in billowy white fabric, tabletop lamps in first dining area, and a larger mirrored dining room that is both elegant and lovably cluttered—think lola’s house with random items stacked in corners—there’s nothing like it. The best part: Filipino silog breakfast. All. Day. Long.

Try the deliciously pink and crunchy tocino (pork BBQ one Southern girlfriend of mine described as “meat candy”) or tapa (cured beef) with two sunny-side-up eggs and garlic rice—mix them together and eat with a spoon and fork, Pinoy style—and wash it down with fresh calamansi juice, served hot or cold. For dessert try the ube cake served warm or Filipinos’ colorful bowl of joy, halo-halo (“mix”), with shaved ice, ice cream (make it ube), leche flan (you guessed it, flan), sweet beans, jackfruit, and other surprises. Sarap!

Salamat (thanks), Los Angeles, for so many options “because I don’t cook,” says my mom. The only things she still misses from the Philippines? The tropical fruits lanzones and atis. Hopefully one of these places will satisfy her craving in the near future.