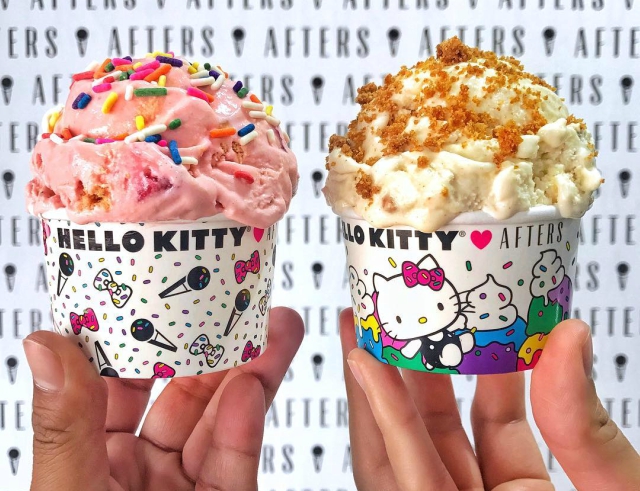 The launch of the collaboration will take place Thursday night at Afters' Irvine location. Attendees will get a limited edition tee-shirt and the chance to meet Hello Kitty. According to FoodBeast, the Irvine location has already been decked out in full Hello Kitty decor (re: bubblegum pink).

Following the launch, the flavors will be available at all Afters Ice Cream locations through August 13.

Hello Kitty (and Sanrio, more broadly) has been popping up in food places around the Southland quite frequently lately. In April, a Hello Kitty cafe pop-up opened in Arcadia. Last year, Sanrio teamed up with burger purveyors Plan Check for a series of Sanrio-themed items. And in 2015, the Hello Kitty cafe made its North American debut in Irvine.

LAist reached out to Afters, but has not heard back by publication.

GET THIS SHIRT FREE‼️ Our #HELLOKITTYxAFTERS collab launch party is THIS THU 6/29 7pm at our Irvine location! 🎀 @hellokitty herself will be making an appearance and our first 💯 customers get this exclusive #HELLOKITTYxAFTERS TEE! 👕 We're also launching 2 new flavors with #HelloKitty available at all locations: Yummy Strawberry Cake and Mama's Apple Pie 🍰🍎 SEE YOU THERE! 🤗 #aftersicecream 📍: 2738 Alton Pkwy, Irvine, CA 92606 👇 TAG A HELLO KITTY FAN 👇