You Can Now Get Married At A Taco Bell, Because Romance Is Not Dead 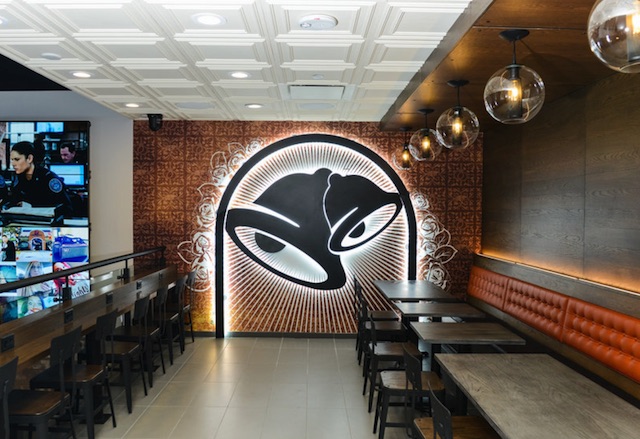 True romantics, rejoice—the storybook wedding you always dreamed of will soon be available for $600 at a Taco Bell on the Las Vegas Strip. (Insert amazing pun about "wedding bells" and "Taco Bell" here.) On August 7, Taco Bell Cantina will begin performing marriage ceremonies from the counter of its flagship Vegas location, the L.A. Times reports.

Taco Bell's helpful "How To Get Married" website is full of details about the nuptial package, noting that the restaurant will provide a private reception area for up to 15 guests, as well as "Just Married" T-shirts for the bride and groom, Taco Bell-branded champagne flutes and a Sauce Packet bouquet for the bride to use during the ceremony. Eat your heart out, Middleton sisters.

One wedding has already taken place at the Planet Hollywood resort-adjacent Taco Bell; Dan Ryckert and Bianca Monda, a New York City couple, were flown to Vegas to tie the knot last Sunday as winners of Taco Bell's "Love and Tacos" contest. The groom later took to Twitter to gush about his wedding.

Over the weekend, I married my best friend while surrounded by people that I love. I've never been happier. pic.twitter.com/62INwzIHM9

For betrothed couples seeking a more affordable Vegas fast-food nuptial experience, Denny's on Fremont Street offers a wedding package for just $199. Over at Taco Bell, the wait for an officiant from Flora Pop, a Vegas-based wedding pop-up, can apparently take up to four hours, but hey, that's four hours you get to spend eating a Cheesy Gordita Crunch in your wedding finery. Now that's a story to tell the grandkids.