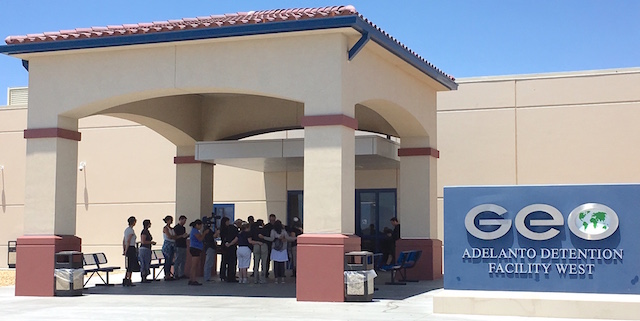 A group of faith leaders prayers outside of the Adelanto Detention Center on Tuesday, June 20, shortly before the lockdown. (Photo by Nancy Evans, courtesy of Community Initiatives for Visiting Immigrants in Confinement)

On Tuesday, a group of more than 60 faith leaders and attorneys visiting an immigrant detention center in the high desert was refused entry, and the entire facility was put on lockdown shortly thereafter. Family members and lawyers who were already visiting detainees inside the Adelanto Detention Center were also forced to leave. Members of the interfaith group that planned the "pilgrimage" visit to Adelanto allege that the facility was put on lockdown in response to a short, peaceful prayer circle led by clergy members just outside the entrance to the facility.

An Immigrations and Customs Enforcement (ICE) spokesperson said in a statement that although ICE is "committed to facilitating visitation for those housed in its detention centers," ICE "reserves the right to deny visitors access or temporarily suspend visitation in the event of security concerns, as was the case at the Adelanto Detention Facility on Tuesday."

Located on a barren stretch of sunbaked road about two hours northeast of downtown Los Angeles, the Adelanto Detention Center is the largest immigrant detention center in California. Although it falls under the jurisdiction of Immigration and Customs Enforcement, the privately-owned facility is run, like many other immigrant detention facilities, by GEO Group, the nation's second largest for-profit prison operator. ICE contracts with the city of Adelanto for the space, and the city of Adelanto contracts with GEO Group to run the facility. Three detainees have died over the past three months at the facility, whose population hovers just under 2,000 people.

Christina Fialho, the executive director of CIVIC, a national advocacy and watchdog group that regularly brings groups to visit detainees at Adelanto, told LAist that no pre-approval is required for family and community visits to the facility as long as they fall during regular visitation hours. "We do it all the time," Fialho told LAist, explaining that they had specific detainees they planned to visit with in small groups.

"We were going there just to listen and be present," Jaime Edwards-Acton, an episcopal priest and rector of St. Stephen's Church in Hollywood, told LAist. The interfaith group, which included Muslims, Christians and Jews, had planned the visit to commemorate World Refugee Day and chartered a bus from Los Angeles to make the trip to Adelanto. The group also planned to visit some of the individuals who had been involved in a hunger strike at Adelanto last week (the strike resumed on Thursday). 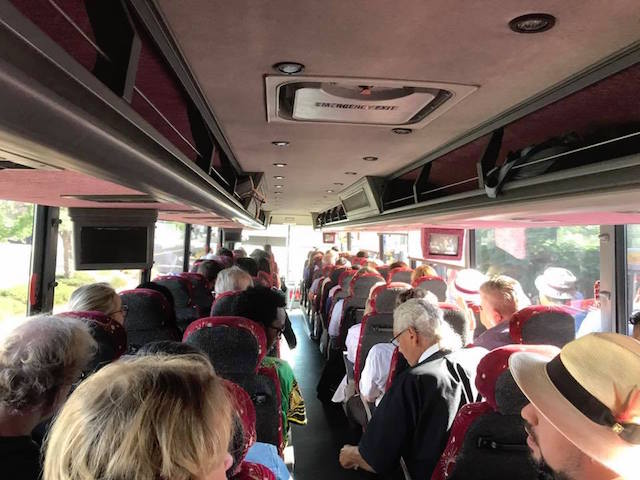 Members of the interfaith pilgrimage group on the bus to Adelanto Detention Center. (Photo courtesy of Jaime Edwards-Acton)

Fialho said that when the group arrived on Tuesday afternoon, the facility's warden came out and asked them what they were doing.

"We said that we were here to visit our friends and family and clients in detention," Fialho, who is also an attorney, told LAist. According to Fialho, the warden said he would have to ask ICE if the group could enter. The group was soon told that under the circumstances, they would not be allowed to visit.

"Shortly before 1 p.m., nearly 60 individuals arrived at the center unannounced by bus and sought to speak with detainees," ICE said in a statement to LAist. "The group’s organizer was politely told they would not be admitted as prior approval would be required to accommodate such a large contingent. Regardless, members of the group persisted and attempted to enter the facility’s west lobby. They were turned away by facility personnel and the doors to the lobbies of the center’s east and west facilities were subsequently secured."

"We tried to ask why, were not provided with an answer, and went back on the bus to figure out what was happening," Fialho recalled. At that point, a group of about ten to fifteen clergy members, including priests, ministers, pastors, and a rabbi got off the bus and formed a prayer circle, according to Fialho.

Fialho said that the group held hands and prayed outside of the facility for about five minutes.

"After the prayer, they locked all the doors and I was not able to enter the facility for my attorney visits, which had been pre-approved by ICE. In fact, the Warden of the facility had confirmed that afternoon that I would be allowed to do my legal visits," she said. "But after I prayed, ICE and GEO Group locked me out. They then expelled all the people not even associated with the pilgrimage from the facility, so little kids who had driven hours wth their parents [had to leave]." 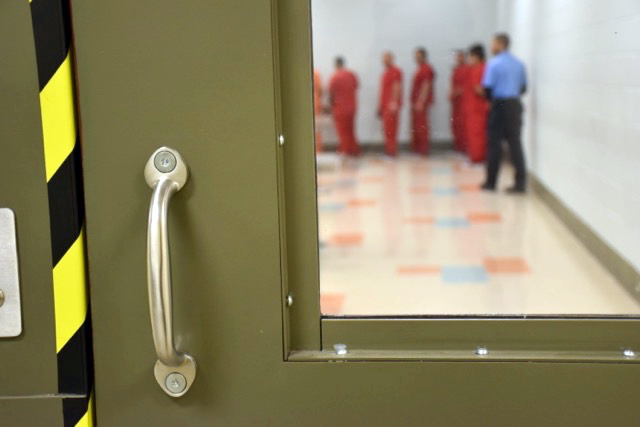 The group then moved their bus off the premises to a public lot across the street while various members tried calling ICE's national office, local elected representatives and others, as they watched the number of people being forced to leave facility grow.

Edwards-Acton, the Episcopal priest from Hollywood, underscored that same point, telling LAist that the group tried to convey that although they had come to visit, "the last thing we want to do is have these folks who have driven hours to see their families have to leave. We said we'll go on our way if you let them back in."

"It was like 110 degrees out, in the sun. There's no shade," Edwards-Acton recalled. "We started handing waters out to families and kids because it was so hot. They were making everybody leave and that crowd kept growing."

When it became clear that the families were not going to be let back in, the group decided to get back off the bus and hold an impromptu vigil, according to Edwards-Acton. "We prayed and we sang and we assured one another—and hopefully, in some way, assured those inside—that we'd be back," the priest said.

Edwards-Acton described the day's events as "an awful injustice, particularly for those families who had to leave—and the [detained] people inside who had been waiting for our visit."

"Out of an abundance of caution visitation at the facility was temporarily halted. ICE regrets any inconvenience, but the agency’s foremost consideration is the safety of all those at the facility, including detainees and employees," ICE said in their statement, adding that the facility resumed normal operations the next day.

"This is something that has been a pattern at this particular facility: on multiple other occasions GEO and ICE have denied access to volunteers and attorneys," Fialho told LAist.