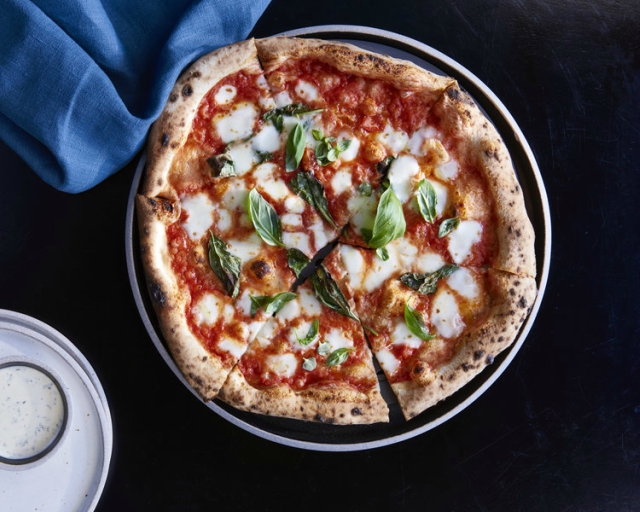 Jonathan Gold's review of Pizzana, chef Daniele Uditi's new Brentwood pizza temple, came out over the weekend. Of note? Gold compared Uditi's pizza to some of the best pizza on Earth. Yeah, how about them apples?

First, a little back-story. Uditi trained at his family's bakery in Italy before moving to Los Angeles. Once here, he kicked around for a while as a cook, and even as a private chef. It was through this that actor Chris O'Donnell (yes, Scent of a Woman Chris O'Donnell) met the chef and had him over to the O'Donnell Family Abode (that's what I imagine Chris calls it) to make pizza. At some point, Charles and Candace Nelson (who opened Sprinkles Cupcakes) fell in love with Uditi's pizzas. "So, we said, let's do a restaurant," O'Donnell said in an April episode of Conan. "And it's opening. It's kinda fun."

But back to Jonathan Gold. He first notes the hours-long line that normally queues up at Pizzana (guess he's not the only one who loves it) before jumping into the Neo-Margherita pizza.

Does Uditi have a signature pizza? Not officially, although I’m guessing that it will end up being the Neo-Margherita, a take on the Neapolitan classic. There is rather a lot of cheese on a Neo-Margherita, a bit of oil, and a layer of San Marzano tomatoes cooked down to a dense slurry. (Uditi imports the San Marzanos himself.) The top of the pizza is dusted with a green flurry of toasted breadcrumbs infused with herbs. When you bite into the pizza — unlike the last Margherita pizza you had, this one is stiff enough to pick up with your hands — there is a crackle, a crunch, and a blast of fresh basil, that licoricey greenness that never quite comes through from a single raw leaf, right before the caramelized tomato acidity kicks in.

With that heavenly description out of the way (and our tastebuds interest piqued), Gold elevates Uditi's work to the heights of some of the best.

Does it resemble in some ways the modernized Margherita made famous by Franco Pepe, whose pizzeria in Caiazzo, north of Naples, is considered by some people (including me) to be the best in the world? It does, although Pepe’s pizza achieves its effect through stripes of concentrated sauces on a layer of cheese, and gives an impression of lushness rather than herbal intensity.

Both pizzas solve what could be seen as the traditional Margherita’s problems of irregularly distributed basil and a wet, soupy center. Both pizzas have half-lives that can be measured in minutes instead of seconds.

An additional note on Uditi's dough. Uditi blends his "slow dough" with imported Italian flour, and then allows it to ferment for 48 hours. The result? A light, delicious crust that is also sturdy.

As if you need more incentive to visit, we'd also like to mention that the 45-seat restaurant has a wine and beer list crafted by Amanda Crawford, and Sprinkles' Candace Nelson designed the pastry menu with creations like the Neapolitan Ice Cream Terrine.